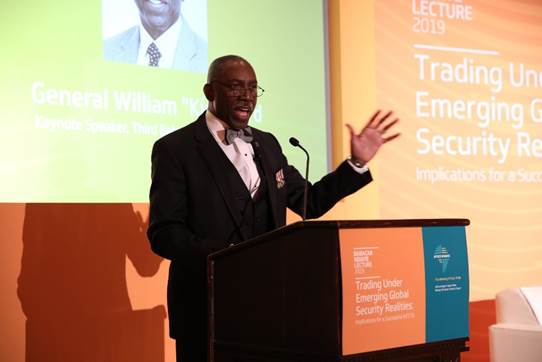 Washington, D.C., 19 Oct. 2019: – To ensure effective implementation of the African continental Free Trade Area (AfCFTA) Agreement, African countries must address corruption and abuse of power in the security sector as they could impede and raise the cost of trade, Gen. William Ward, former Commander of the United States Africa Command (AFRICOM), said in Washington D.C. today.

Delivering the third Babacar Ndiaye Lecture, which was organised by the African Export-Import Bank (Afreximbank) on the sidelines of the Annual Meetings of the World Bank Group and the International Monetary Fund, Gen. Ward said that corruption and abuse of power in the security sector could become significant non-tariff barriers to trade and to the success of the AfCFTA.

“Reforming the security sector, particularly in countries that experience conflict or serious security challenges, is a critical element of conflict management, peace, and security and can provide a safe and stable environment for political and economic growth,” he told guests at the lecture.

Gen. Ward also highlighted the importance of respect for the rule of law in the implementation of the AfCFTA, saying that it would provide traders and investors with the confidence to engage in cross-border trade in the knowledge that legal commitments undertaken by countries would be enforced and respected and that, should challenges arise, they would have recourse through robust legal systems.

He recommended regional approaches to dispute settlement and to ensuring the quality of goods traded under the AfCFTA. “Failure to do so could see rise in tension and could undermine integration efforts as traders or consumers feel aggrieved by arbitrary restrictions or sub-par or risky products entering their markets from other African countries. These can lead to border closures or to an increase in interstate tensions, especially if no legal avenue for recourse is provided,” he added.

Gen. Ward said that international investment into Africa and allowing African economies to diversify and move up the technology frontier would mitigate some of the global security challenges emanating from migration as people seek opportunities outside the region.

“The opportunities provided by the AfCFTA, coupled with investment by development partners, could shift the patterns of migration from one driven by security concerns to one driven by entrepreneurial spirit, creating growth opportunities for receiving countries,” explained Gen. Ward.

He described security and development as two faces of the same coin and said that robust and long-run economic growth rates were required to narrow income gaps with between Africa and the world’s advanced economies.

Earlier, Prof. Benedict Oramah, President of Afreximbank, said that, while Africa was not the theatre of instability or the source of current global uncertainty, some parts of Africa had been the epicentre of raging conflicts and insecurity which were undermining cross-border trade. Those conflicts were increasingly triggered by geopolitical dynamics.

Understanding the sources and causes of conflicts and insecurity was, therefore, important for creating a protective shield against crises and episodes of war which had magnified risk perception across Africa, he said. Those perceptions raised costs and undermined prospects for long-term investment and regional integration in Africa.

Prof. Oramah commended the vision of Dr. Babacar Ndiaye in identifying and working tirelessly to establish institutions, such as Afreximbank, as strategic instruments for accelerating economic development in Africa.

“About 26 years later, the African Export-Import Bank—the Trade Finance Bank for Africa, has become an important instrument in the quest for Africa’s development and its effective integration into the world economy as envisioned by Dr Ndiaye when he conceived the idea; it has stepped in to correct market failures; filling trade finance gaps when markets panic and being a partner of choice to international banks wary of African risks,” he said.

“Since inception, Afreximbank has disbursed over $60 billion in support of African trade and attracted about $70 billion into strategic sectors of the African, economy using various instruments,” stated Prof. Oramah. “Through the effort of Afreximbank, many African entrepreneurs are now able to win and execute major public sector projects across the continent.”

Dr. Leila Ndiaye, daughter of Dr. Ndiaye, read a tribute to her father.

The Babacar Ndiaye Lecture series recognises and immortalises Dr. Ndiaye, who was President of the African Development Bank from 1985 to 1995, for his many important contributions to Africa’s economic development, in particular, his critical role in the creation of Afreximbank.

Dr. Ndiaye, who died in July 2017, was also behind the creation of several other continental institutions, including Shelter Afrique and the African Business Roundtable. He is credited with fostering the emergence of many young entrepreneurs who are helping to build Africa today.