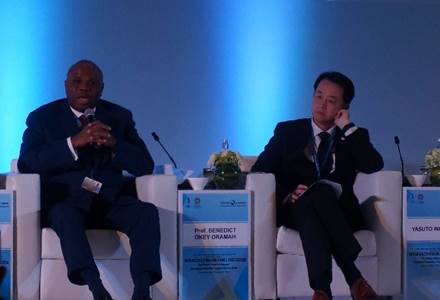 Bali, Indonesia, 10 Oct. 2018: – The economies of the South must work together in order to deal with the uncertainties resulting from the current global trade environment, Prof. Benedict Oramah, President of the African Export-Import Bank (Afreximbank), said yesterday in Bali, Indonesia.

Speaking during a Panel discussion on “The Growing Importance of South-South Cooperation Amid Trade Tensions and Global Financial Market Volatility” organised on the sidelines of the 2018 International Monetary Fund and World Bank Group Annual Meetings, Prof. Oramah said that the rising sentiment of anti-globalism and the push back on multilateralism by the some global powers had put Africa at the periphery, with only three per cent global trade.

Many South economies were in the same situation, he noted, but stated that, with the largest and youngest population and the fastest growing middle class, the economies of the South had all the ingredients to drive economic growth.

It was, therefore, necessary for those developing economies to work together so as to negotiate in concert at the global level, he explained.

Prof. Oramah announced that Afreximbank was building partnerships and developing frameworks that will attract South-South investment and trade into Africa, saying that trade with the South has become dominant in Africa.

According to him, Africa-South trade has reached 56 per cent of the continent’s total trade as against the former figure of about 16 per cent in the early 1990s.

Earlier, Mardiasmo, Vice Minister of Finance of Indonesia, said that the current isolationist rhetoric was not helpful and had a negative effect on global economic outlook.

He argued that the current economic challenges could be addressing through further collaboration among southern countries through trade agreements.

Prof. Oramah is leading an Afreximbank delegation attending the 2018 International Monetary Fund and World Bank Group Annual Meetings which are taking place in Bali from 8 to 14 October.

The panel discussion was organised by the Indonesia Eximbank.