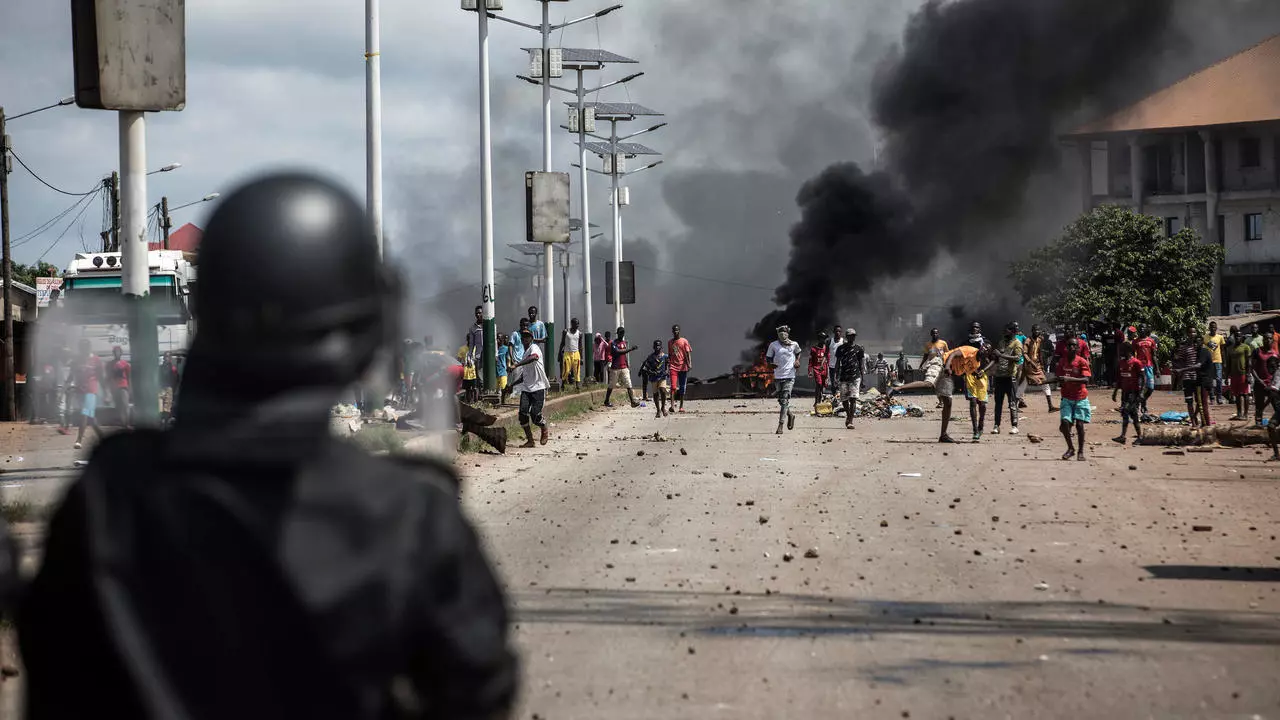 Nine people, including one police officer, have died in the West African state of Guinea, the security ministry said Wednesday, following days of unrest after a tense weekend presidential election.

In a statement, the ministry pointed to shootings and stabbings in the capital Conakry and elsewhere in the country since Sunday’s presidential vote.

“This strategy of chaos (was) orchestrated to jeopardise the elections of October 18,” the ministry said, adding that many people had been injured and property was damaged.

Clashes were ongoing in Conakry on Wednesday, where a security officer, Mamadou Keganan Doumbouya, told AFP that at least three people had died.

And a local doctor, who declined to be named, said he had received two dead bodies, and nine injured people, at his clinic.

The violence follows the high-stakes election in which President Alpha Conde ran for a third term in a controversial bid that had already sparked mass protests.

With tensions already running high, Guinea’s main opposition leader Cellou Dalein Diallo on Monday declared victory in the election — before the announcement of the official results, which are expected this week.

Opposition supporters are deeply suspicious about the fairness of the poll, although the government insists that it was fair.

Much of the tension in Guinea centres on Conde’s candidacy.

In March, the 82-year-old president pushed through a new constitution which he argued would modernise the country. It also allowed him to bypass a two-term limit for presidents, however.

On Wednesday, plumes of black smoke rose over an opposition stronghold in the capital Conakry, where protesters erected barricades and lit fires, an AFP journalist saw.

Youths in alleyways also hurled stones at police officers stationed along a main artery who fired back tear gas canisters.

The security ministry stated that “a police officer was lynched to death” in a Conakry suburb, without specifying when the attack occurred.

In a social media post earlier on Wednesday, Conde appealed for “calm and serenity while awaiting the outcome of the electoral process”.

Ten candidates are in the race besides alongside frontrunners Conde and Diallo, old political rivals who traded barbs in a bitter campaign.

Despite fears of violence after the pre-vote clashes, polling day was mostly calm.

Then Diallo’s self-proclaimed election victory ratcheted up tensions, and celebrations by his supporters descended into violent clashes with security forces on Monday.

The opposition politician said that security forces killed three youngsters that night, although AFP was unable to confirm the details.

Security forces also barricaded Diallo inside his house, the politician said on Tuesday.

Monitors from the African Union and the 15-nation West African bloc ECOWAS both said that Guinea’s election was mostly fair, despite insistence from Diallo’s camp that it was fraudulent.

Diallo was prime minister under authoritarian leader Lansana Conte — a fact that Conde underscored repeatedly on the campaign trail.

A former opposition activist himself, Conde became Guinea’s first democratically elected president in 2010 and was re-elected in 2015.

Rights groups accuse him of veering towards authoritarianism, however, saying he is prone to fits of anger and reluctant to hold his security forces to account.