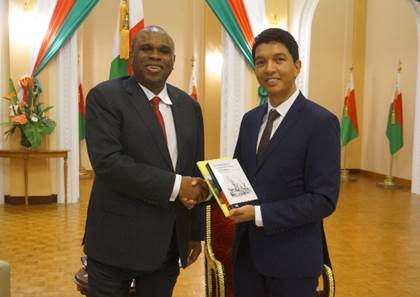 Antananarivo, 17 May 2019: – President Andry Rajoelina of Madagascar has urged the African Export-Import Bank (Afreximbank) to partner with the government in its effort to make the country the “window into a modern Africa”.

Speaking yesterday in Antananarivo when he received an Afreximbank delegation led by Prof. Benedict Oramah, President of the Bank, President Rajoelina said that the government had put in place an “Initiative for Emerging Madagascar” which articulates its plans to turn the country into a modern industrial nation.

That document had been endorsed by key internal and external stakeholders as necessary for the country’s development, he stated. It captured the government’s vision to become a model for the African continent and was a reflection of the wind of change that was blowing across Africa.

“Our objective is to industrialise Madagascar,” he said, as he identified energy, tourism and hospitality, agriculture, social housing, education, healthcare and infrastructure development as the priority areas where Afreximbank’s support was required.

President Rajoelina noted that energy costs in Madagascar were among the highest in Africa and said that the government’s objective was to produce energy at affordable costs and to double or triple production capacity from the current 400 megawatts, focusing on renewable sources.

“Our key objective is to create an enabling environment for the private sector to thrive,” he added.

Earlier, Prof. Oramah said that assessment missions conducted by Afreximbank in Madagascar had identified transactions valued at about $700 million which the Bank could support with financing.

He said that the Bank has already held discussions with relevant ministries and, having understood the constraints on the country, had developed ideas on how best to provide needed support. The Bank saw opportunities in the development of industrial parks for export manufacturing, trade lines to banks, tourism, in the development of ports, rails, and renewable energy, and in attracting investors into the country, including by providing guarantees which the government could offer such investors.

Afreximbank had developed a special programme for small and medium-scale enterprises (SMEs) under which it could work with the central bank to provide refinancing when local banks provided medium-term loans to SMEs, added Prof. Oramah. The Bank could also help to organize an investment promotion conference to which investors from other African countries and from outside Africa could be invited.

Earlier, the delegation met with Lantosoa Rakotomalala, the Minister of Industry, Trade and Artisanship, to brief her on the Bank’s role and approach to Madagascar, and paid a courtesy call on Hawa Ahmed Youssouf, Special Representative of the Chairperson of the African Union Commission to Madagascar and Comoros.

The delegation rounded up the visit to Madagascar with a meeting with representatives of the country’s private sector.

Accompanying President Oramah on the delegation were Rene Awambeng, Global Head of Client Relations; Obi Emekekwue, Global Head of Communications and Events; Ekene Uzor, Special Assistant to the President; Humphrey Nwugo, Regional Chief Operating Officer, Southern Africa; and Gerald Nsomba of the Intra-African Tarde Initiative. They were joined by Kee Chong Li Kwong Wing, Group Chairman of SBM Group of Mauritius, who is also a member of the Board of Directors of Afreximbank.