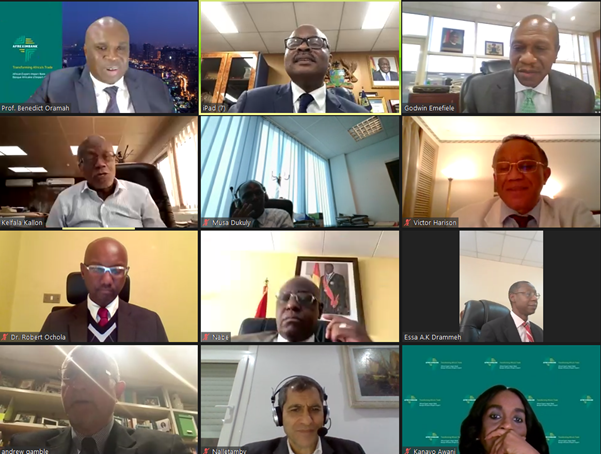 Cairo, 07 December 2020: – The interim Governing Council of the Pan-African Payment and Settlement System (PAPSS) held its inaugural meeting in Cairo on 3 December 2020, a historic step towards the operationalization of the payment system. Developed by African Export-Import Bank (Afreximbank), under the auspices of the African Continental Free Trade Area (AfCFTA) Secretariat and the African Union (AU), PAPSS will enable intra-African trade and commerce payments to be made in African currencies in furtherance of the goals of the AfCFTA.

The meeting of the Governing Council sets the stage for PAPSS operational launch early in the new year.The interim PAPSS Governing Council is comprised of Central Bank Governors of the six countries of the West African Monetary Zone (WAMZ) where PAPSS will carry out its pilot phase, the AU Commissioner for Economic Affairs, the Secretary General of the AfCFTA and a representative each of African Development Bank and Afreximbank.

The Council is charged with providing regulatory oversight to ensure the success of the payment system.Speaking at the meeting, Mr. Godwin Emefiele, Governor of the Central Bank of Nigeria and Chair of the PGC, expressed the commitment of central banks of WAMZ to support the successful implementation and roll out of PAPSS within the WAMZ to facilitate the implementation of the AfCFTA.

Afreximbank President, Professor Benedict Oramah said that the first meeting of the PAPSS Governing Council was the start of the implementation of a system that would minimize the financial cost of cross border trade and improve financial integration as well as Africa’s trade and investment competitiveness.

“A system that allows a small trader in Nigeria to freely import goods from Sierra Leone using the Naira; without thinking of his ability to buy a third currency, exchange and settlement costs and the length of time it takes for payment to arrive, will certainly be transformational,” stated Prof. Oramah.

Adopted in July 2019 by the African Union Heads of State as the payment and settlement system to support the implementation of the AfCFTA, PAPSS is expected to create new financial flows and successfully facilitate trade and other economic activities among African countries.

Afreximbank is the operator and the main Settlement Agent for PAPSS.

The Bank will provide settlement guarantee on the payment system as well as overdraft facilities to all settlement agents.