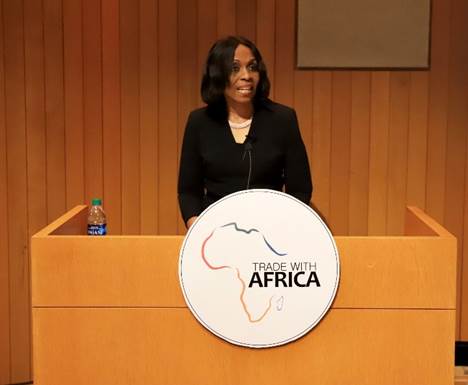 In a keynote address during the opening of the Trade with Africa (TWA) Business Summit in Chicago, United States, on Thursday, Ms. Awani said that such an approach would allow for such value-added goods to be traded within the continent and globally in a competitive manner.

She highlighted the need for the approach to be underpinned by enhanced collaboration, including with governments regional development banks, the private sector and relevant stakeholders on the continent and in the Diaspora.

The Bank had also recently launched the Pan-African Payments and Settlements System, established MANSA, an Africa customer due diligence repository platform, and instituted the Intra-African Trade Fair, which hold its second edition in Kigali from 1 to 7 September 2020, in order to further boost intra-African trade and support the implementation of the African Continental Free Trade Area (AfCFTA), continued the Managing Director.

She reaffirmed Afreximbank’s commitment to transforming trade on the African continent and to working with partners, including the U.S., to promote inclusive growth and socio-economic transformation.

Although the political relationship between African policy makers and Washington had strengthened in the last two decades, resulting in increased in foreign aid to Africa, she noted, the conversation had shifted from capturing foreign aid to trade. The accompanying strategy, therefore, needed to shift to take into account that Africa now had many of the fastest growing economies in the world and was home to a rapidly growing consumer class.

Ms. Awani added that, with the Diaspora accounting for 32 million Africans, there were opportunities for growth in Diaspora-focused trade in ethnic foods, textiles, the creative industry, including music and film, and in tourism.

Also speaking, Albert Muchanga, African Union Commissioner for Trade and Industry, said that the AfCFTA had the potential to overhaul, ease and increase trade across borders in Africa.

Toyin Umesiri, founder of the TWA Summit, urged African and U.S. policy makers to remove barriers to trade in order to foster economic growth in both regions and to allow for the exploitation of the untapped market for authentic African products, raw and manufactured items in the U.S.