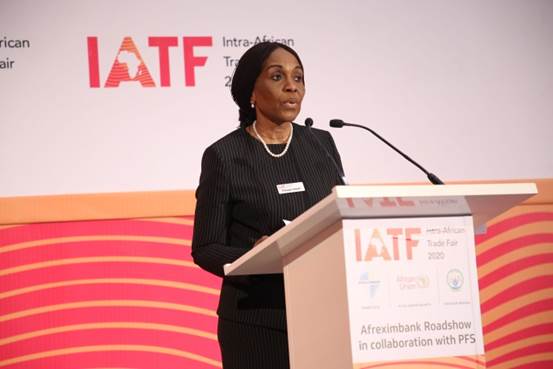 Addressing the opening of a roadshow held in Kigali on Tuesday to raise awareness about IATF2020 and to showcase Afreximbank products and services, Ms. Awani said that the way each country prepared for the operational phase of the AfCFTA, which will commence on 1 July, would determine how successfully it would benefit from the initiative.

She said that IATF2020 would provide strong business insight within Africa by connecting buyers and sellers of goods and services across the continent.

As the host country of IATF2020, Rwanda and Rwandan businesses would be the greatest beneficiaries of the trade fair, said Ms. Awani.

“IATF2020, we believe, will transform the way Africans trade with each other, and, specifically, the way Rwanda trades with other African countries,” she said.

Stephen Ruzibiza, CEO of Private Sector Federation Rwanda, which co-organised the roadshow, said that the commencement of trade under the AfCFTA was a critical moment for Africa and that the efforts to be deployed would determine success.

“If we don’t put more emphasis now, then we may not realise the benefits of the AfCFTA and intra-African trade,” he told the audience.

The roadshow featured presentations of trade-enabling initiatives and a comprehensive suite of products and facilities available from Afreximbank. These include the Bank’s industrial parks projects; the Africa Quality Assurance Centres, which aim to address challenges relating to compliance with standards; the Centre of Excellence on health; the Afreximbank Trade Facilitation Programme and other instruments seeking to address the lack of access to finance by SMEs; the $3.5-billion adjustment facility to assist the public and private sector adjust to the new trading regime of the AfCFTA; the $500-million Creative Industry Support Fund of the Bank’s Creative Economy strategy; and the Pan-African Payment and Settlement System for which pilot tests will start in few weeks.

The roadshow attracted about 250 members of Rwandan business community and was held on the sidelines of the fifth meeting of the IATF2020 Advisory Council.