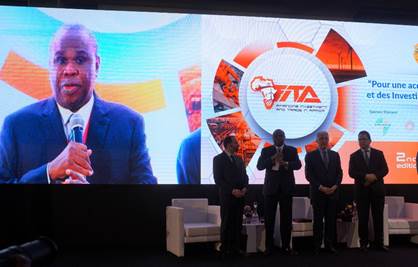 Tunis, 06 Feb. 2019: – The Fund for Export Development in Africa (FEDA), the equity investment fund created recently by the African Export-Import Bank (Afreximbank), will catalyse foreign direct investment (FDI) flows into Africa’s trade and export sectors, Prof. Benedict Oramah, President of the Bank, said yesterday.Speaking in Tunis during the opening of the Financing Investment and Trade in Africa conference organized by the Tunisia-Africa Business Council, Prof. Oramah said that Afreximbank’s vision was to leverage $1 billion in support of FEDA’s mission and to catalyze four times that amount in FDI in five years.

He explained that the kind of equity funding currently available in Africa was not appropriate for turning the continent into the trade hub which it needed to become in order to achieve desired growth, saying that FEDA would ensure that investors’ investments were protected under the immunities and privileges available to Afreximbank and that the investments enjoyed tax privileges and incentives.
The President described development finance institutions as market failure institutions that existed to complement what markets were unable to offer or that begin to create markets, explaining that, as a result, Afreximbank’s interventions were based on the philosophy of bringing additionality, rather than displacing commercial banks.

Afreximbank was making it possible for financing to come into Africa, he said. The Bank had just expanded its guarantee offering to make it more accessible to companies coming into Africa, including through its Intra-African Investment Guarantee Facility. It had also introduced Mansa, a customer due diligence platform, which will help to address the challenge of many African countries not being able to access trade finance due to high compliance cost.
On infrastructure, the President said that if the continent looked inward, it could find the funds to meet its infrastructure needs. According to him, with the about $700 billion under management by African pension funds and the reserves kept abroad by African central banks already adding up to about $1 trillion, the funds are already adequate to meet Africa’s need. However, because they are outside the continent, and those keeping them deem it too risky to invest in Africa, the funds are not being invested in Africa.

“These are things that need to be fixed,” he argued.
President Oramah announced that Afreximbank was developing a platform that would make it possible for cross-border trade to occur in local currencies across Africa. The Bank was discussing with the Association of Africa Stock Exchanges to use the platform to bring liquidity to the member exchanges.

He said that there was need for a change in mindset and for regulatory reform that would allow the creation of pan-African solutions in order for liquidity to come to some of the African exchanges to enable them can carry infrastructure funds.

Touting Afreximbank’s support for Tunisia, the President recalled that the Bank had just announced a $500-million Tunisia-Africa Trade and Investment Promotion Programme, which will support Tunisian businesses trading with the rest of Africa and had approved $300 million for six Tunisian banks under its Afreximbank Trade Facilitation Programme.

It was also was considering reopening its Tunis-based Regional Office for the Maghreb Region in order to revive trade flows between North Africa and the rest of the continent and to be nearer to Tunisian businesses.

Prof. Oramah was leading an Afreximbank delegation participating in the two-day Financing Investment and Trade in Africa conference hosted by the Tunisia-Africa Business Council from 5 to 6 February.
—–