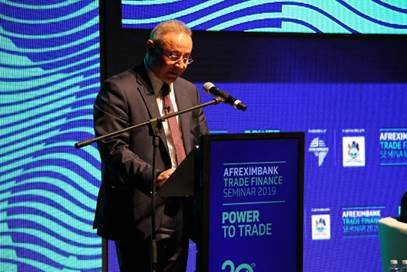 Durban, South Africa, 4 Nov. 2019: The 2019 Afreximbank Trade Finance Seminar and Workshop opened in Durban, South Africa, today with Amr Kamel, Executive Vice President in charge of Business Development and Corporate Banking at the African Export-Import Bank (Afreximbank), saying that the Bank wanted to ensure that African banks and bankers were well-equipped to deal with the risks in financing trade under a difficult politico-economic environment and changing trade counterparties.

In his address at the opening ceremony, Mr. Kamel said that the seminar and workshops, organised by Afreximbank in collaboration with the South African province of Kwazulu-Natal, was part of the Bank’s strategy to develop and strengthen trade finance capacity in Africa.

The training had been structured to ensure that participants acquired the capacity to structure bankable trade finance deals of varying levels of complexity, he stated.

“As Banks, we all play a critical role in promoting trade,” said Mr. Kamel. “We must do this by managing the risks for traders as well as by facilitating payments while bridging the cashflow gaps that characterize international trade.”

He said that 2019 would go down as a watershed in Africa’s history, being the year when the continent came together to affirm its commitment to addressing its economic and social problems through the launch of the operational phase of the African Free Trade Continental Agreement (AfCFTA).

“This should provide traders across Africa with preferential trading arrangements to enable them to enhance the level of intra-African trade and enhance economic growth for our countries,” he said.

Also speaking, Sihle Zikalala, Premier of KwaZulu-Natal Province, said that the province aimed to position itself as the gateway to South Africa and the entire Southern African region.

It aspired to act increasingly as a transmission belt between global and regional markets and production facilities, he explained, adding that the government was working to develop a robust economy that could sustainably create employment, fight poverty and become more globally competitive.