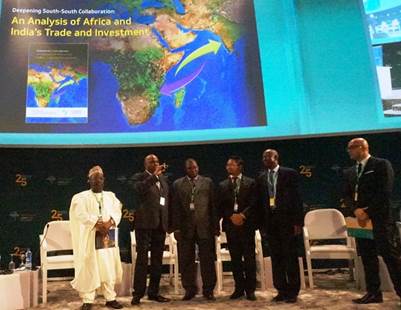 Cairo, 23 July 2018: – Trade between Africa and India rose more than 10-fold between 2001 and 2014, making India Africa’s fourth-largest national trading partner, according to a new report jointly produced by the African Export-Import Bank (Afreximbank) and Exim Bank of India (Exim India).

The report, Deepening South-South Trade: An Analysis of Africa and India’s Trade and Investment, which was launched in Abuja on 12 July, showed that Africa-India bilateral trade rose from $7.2 billion in 2001 to about $78 billion in 2014, before moderating to about $55 billion in 2017.

Such trade accounted for more than 6.8 per cent of total African trade in 2017, up from 2.7 per cent in 2001, with trade with Africa now accounting for about 8 percent of India’s total trade, according to the report, released to coincide with the Afreximbank Annual Meetings held in Abuja from 11 to 14 July.

According to the report, Africa’s exports to India remain essentially concentrated in crude oil and primary commodities while India’s exports to Africa are more diversified and include more manufactured and technological-content products.

It suggested that Africa’s ongoing efforts at diversifying sources of growth and structural transformation would see the composition of trade evolve to include a greater proportion of manufactured, non-traditional and agro-processed exports from Africa to India.

An assessment conducted as part of the study estimated the value of the bilateral trade potential between Africa and India to be in excess of $42 billion per annum.

The study also showed that the attractiveness of Africa and India as investment destinations had risen in recent years, driven by strong economic growth, an improved business environment and better investment climate and regulations, high rates of return on investment, and a rising consumer market, among others. India’s foreign direct investment (FDI) stock in Africa rose from $11.9 billion in 2010 to $15.2 billion in 2014.

Over the same period, Africa’s FDI stock in India increased from $57 billion to $73.3 billion, with investments in such sectors as oil and gas, agriculture, retail, health care and telecommunications.

At the same time, India’s development cooperation with African countries has evolved to incorporate varied avenues such as trade and investment, capacity building, technology transfer, and grants and concessional loans.

The report, conclude that despite the progress, the two partners were not yet operating at their full potential, attributing this to a number of constraints, including finance, infrastructure, capacity and market access, with access to finance singled out as a major inhibiting factor to trade.

The report is the outcome of a joint study conducted by Afreximbank and Exim India as part of ongoing collaboration to accelerate the transformation of the economies of their member countries through innovation in trade finance and expansion of South–South trade.