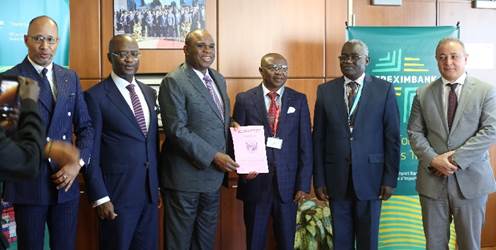 Central African Republic today in Cairo formalised its membership of the African Export-Import Bank (Afreximbank) with the deposit of the instrument of the country’s ratification of the Bank’s Establishment Agreement with the continental trade finance institution.

Speaking during a ceremony at the Bank’s headquarters, Claude Rameaux Bireau, Minister of State and Economic Adviser to the President, who led a five-member delegation, said that Central African Republic had very high expectations from Afreximbank and looked forward to strengthened cooperation with the institution.

Mr. Bireau said that Central African Republic would move quickly to take up shareholding in the Bank and announced that the government was already working with the African Development Bank to support it in that regard.

He added that the country would participate in the Intra-African Trade Fair, which was being organized by Afreximbank in collaboration with the African Union. The trade fair will take place in Cairo from 11 to 17 December.

Earlier, Prof. Benedict Oramah, President of Afreximbank stated, said that the Bank was created to support African countries in both good times and bad times and that the ratification of the Agreement by Central African Republic would make it possible for it to effectively do business in the country.

“The ratification grants us the special privileges and immunities that make it possible for us to take the risks that other commercial banks cannot,” Prof. Oramah explained.

He announced that the Afreximbank had been reviewing six projects, which the country had identified as priorities in order to see how to support them, saying that Central African Republic, with its rich resources, could be an investors paradise if well-marketed.

Central African Republic had initiated the process of joining the Bank on 28 November 2017 when it presented an instrument of accession to the Bank Agreement to Prof. Oramah when he met with President Faustin-Archange Touadéra in Bangui.

Under the terms of the Agreement for the Establishment of the Bank, which was signed by Participating States in Abidjan on 8 May 1993, countries that did not sign on before it entered into force are required to first issue an instrument of acceptance and accession and then proceed to formally ratify the Agreement in order to fully activate their membership of the Bank.

Membership of the Bank gives the Central African Republic automatic access to the full range of products and facilities offered by Afreximbank, including trade finance facilities, project finance services, trade information and advisory services, support in the development of a local content policy and assistance in developing and implementing industrial parks and special economic zones.