MUSICAL SENSATION D’BANJ TO COLLABORATE WITH AFREXIMBANK ON IATF2020 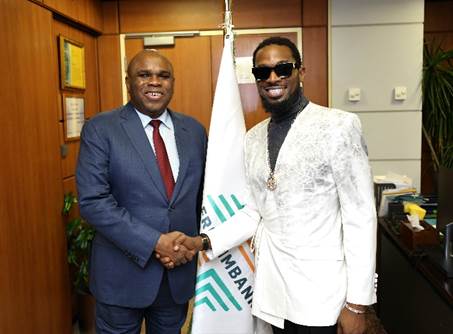 Cairo, 25 Nov. 2019: – Multi-talented Nigerian musical sensation Oladapo Daniel Oyebanjo, better known by his stage name D’banj, has announced that he will collaborate with the African Export-Import Bank (Afreximbank) for the second Intra-African Trade Fair (IATF2020) scheduled to take place in Kigali in September 2020.

D’banj, who visited the Afreximbank headquarters in Cairo on Thursday, was a key figure in the inaugural Intra-African Trade Fair (IATF2018) held in Cairo in December 2018 where his panel presentation and special musical performance were among the major highlights.

He commended the role of the IATF in opening up opportunities for businesses to trade across borders in Africa.

The artist announced that he had established a creative talent portal called CREAM PLATFORM, which was helping to discover young creative minds by letting them upload their ideas by simply dialing a USSD code on a mobile phone.

The CREAM PLATFORM, which currently had 4.6 million subscribers, had led to the discovery of hundreds of talents from the music category alone, with tens of music videos and millions of Naira given out to winners, he explained.

IATF2020, which is being organised by Afreximbank, in collaboration with the African Union, and hosted by the government of Rwanda, will take place from 1 to 7 September 2020. It is expected to attract over 1,000 exhibitors and 5,000 buyers and to generate over $40 billion in business deals.

In addition to meeting with the Afreximbank IATF2020 Committee, D’banj also paid a courtesy call on Prof. Benedict Oramah, President of the Bank.