THE ENOUGH CAMPAIGN | INTERNATIONAL DAY FOR ELIMINATION OF VIOLENCE AGAINST WOMEN 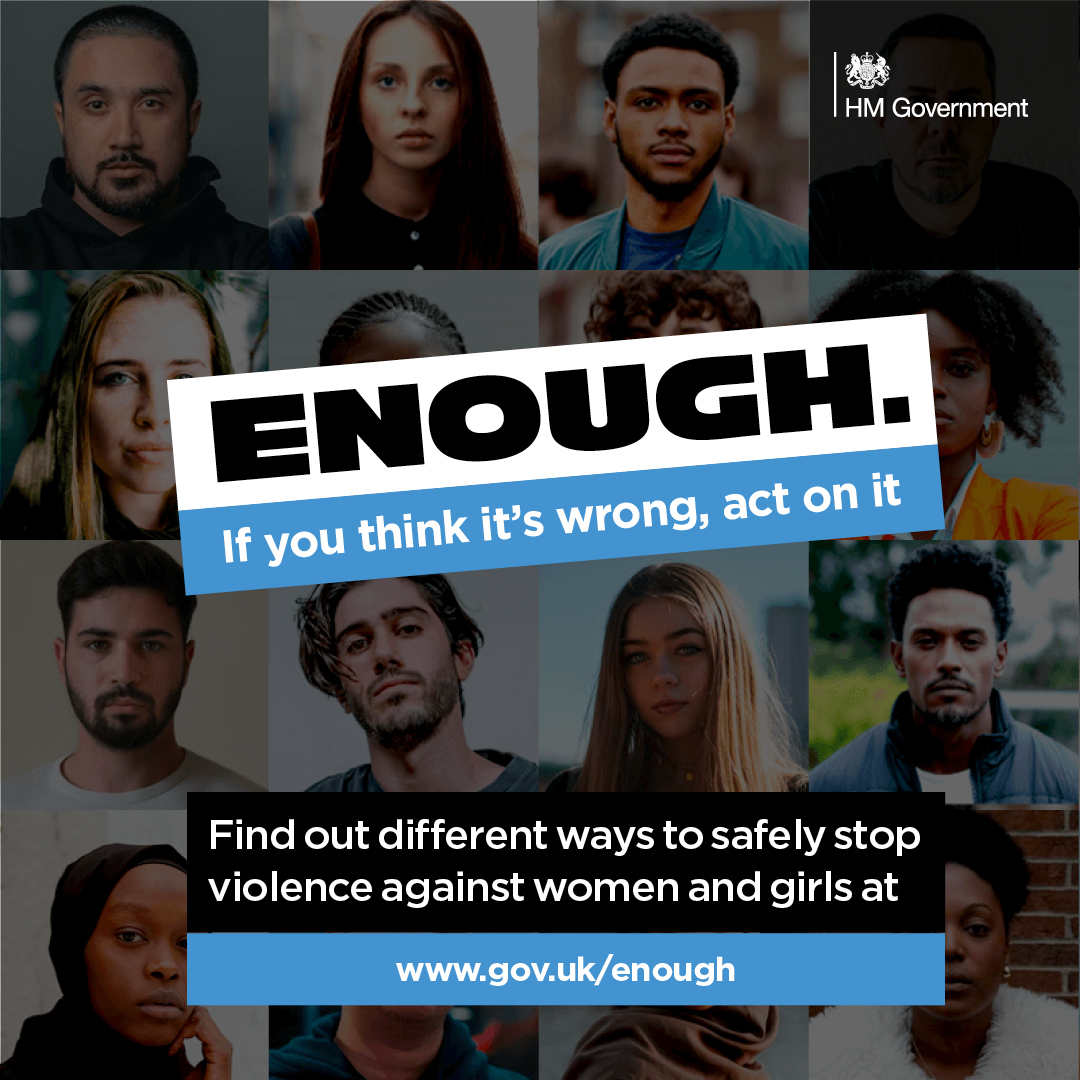 ‘Enough’ campaign tells us how to safely intervene

Ending violence against women and girls is everyone’s business. Whether it takes place in the home, workplace or in public, everyone has a role to play in ending abuse and we must all step up and play our part to help make society a safer place for everyone.

The UN’s International Day for the Elimination of Violence Against Women coincides with the UK government’s second phase of its ‘Enough’ campaign. The campaign is encouraging people to take simple steps to safely take action when they see different types of harassment or abuse. Whether it’s sexual harassment on the street, verbal harassment on public transport, sharing intimate images of someone without their consent or being controlled or coerced – together we can challenge and stop perpetrators of abuse.

Whilst most people recognise that intervening to stop violence against women and girls is important, some people worry about putting themselves at risk or making the situation worse. However, witnesses can play a powerful role in stopping abuse from taking place and intervening doesn’t have to be dramatic or confrontational. There are many different ways you can safely help.

Laura 34 a survivor of controlling or coercive behaviour
“I remember it so clearly, being on the street, my husband angry and aggressive ordering me into the house, shouting and swearing at me. He controlled every aspect of my life. That day on the street, I had refused to go into the house. I was scared that he was going to hurt me. A passer-by, a lady came and asked me how she could help, if there was anything I needed. It was such a simple thing to do, but that day it saved me.”

It’s important to remember that it might not be safe to intervene in the moment and if you think someone is in immediate danger you can call 999 to report to the police.

The ‘Enough’ campaign shares four simple ways to help people safely intervene that can be remembered using the STOP mnemonic:

Any one or a combination of these actions can be used depending on the situation.

Say something
You can show your disapproval at what is going on, for example saying ‘I don’t think that’s funny’ or you could be more direct, if you feel it’s safe to do so, by saying it’s unacceptable and tell them to stop.

Tell someone
You could tell someone in charge, like Human Resources (HR) if you’re at work, or the train guard or bus driver if you’re on public transport. You could also tell another member of the public or a passer-by and see if they’re willing to help – working together can be a safer, more effective way to intervene.

Offer support
You can ask the victim if they’re OK. You could capture what’s happening on your phone and ask if they want the footage to report the incident, and you could offer to help report it. You could also help others already giving support. If it’s someone you know, check in with them when they are alone and offer to help them to report it if they want. If you think they might be in an abusive relationship, you can call the National Domestic Abuse Helpline for free and confidential advice.

Provide a diversion
Sometimes what’s best in the moment is creating a distraction, giving the person being targeted a chance to move away or giving others the opportunity to get help. You could strike up a conversation with the victim, e.g. ask for directions, or where the next stop is on the bus, or pretend you know them.

The ‘Enough’ campaign provides information on support services, how to report abuse to the police and offers guidance for individuals worried about their own behaviour.