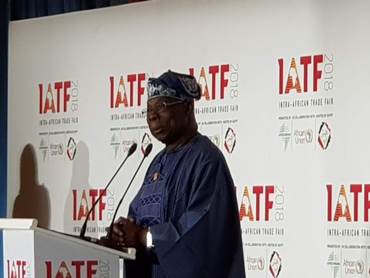 Cairo, 17 December 2018: – The inaugural Intra-African Trade Fair (IATF 2018) ended in Cairo today with the Rwandese capital of Kigali being announced as the host of the 2020 event.

Former Nigeria President Chief Olusegun Obasanjo, who is also Chairman of the IATF Advisory Council, made the announcement during the closing ceremony, saying that Kigali was selected following a competitive bidding process that took into account a set of criteria and guidelines outlined for IATF hosts.

In an acceptance speech, Sheikh Saleh Habimana, the Rwandese Ambassador to Egypt, said that the selection of Kigali was an honour and privilege for Rwanda, noting that it was coming after the historic signing of the African Continental Free Trade Area Agreement (AfCFTA) in that city in March.

“Rwanda is a country that was reduced to ashes during the genocide 25 years ago,” he said. “Twenty-five years down the road, we are getting ready to receive the continent. It has been said that the trademark of Africa is Ebola, but very soon, the trademark of Africa will be tolerance, peace and opening of doors to whomever is in need. The people and Government of Rwanda will ensure that IATF2020 is a stepping stone to assist in intra-African trade. Rwanda will do its best.”

Earlier, in closing remarks, Chief Obasanjo said that the IATF had been a tremendous success and had succeeded in making market information available so that investors, buyers and sellers know what is available, where and when.

He described the AfCFTA as a robust framework that will enhance intra-African trade and remove trade barriers, adding, “This trade fair will also play a huge role in establishing contacts and driving trade development”.

Chief Obasanjo encouraged Africans to believe in Africa and in what Africans can achieve, stating, “There will be challenges, but while standing at a crossroads, we have identified the right road in order to grow African economies, actualize potential and fulfil our destiny. We must work together so that we can swim together in progress, prosperity and security. There is no pride in poverty; only strength, respect and pride in economic power and development.

He expressed gratitude to the African Export-Import Bank (Afreximbank), the African Union Commission and the Government of Egypt, as well as to the event sponsors, IATF 2018 ambassadors, delegates, exhibitors and speakers, for their contributions to the success of the event.

Also speaking, Amb. Albert Muchanga, the African Union (AU) Commissioner for Trade and Industry, reviewed feedback received from IATF participants and acknowledged that they had been both positive and negative, but overwhelmingly positive. He expressed the organisers commitment to learning from and rectifying any shortcomings.

Amb. Muchanga said that the IATF had been a resounding success, noting that visitor numbers and business deals signed exceeded initial targets and that the number of exhibitors visiting one another’s’ stands was very good. “All contributors deserve to be warmly congratulated and appreciated for a job well done and, collectively, all participants in the fair have unveiled a branch that will grow with a dynamism of its own,” he said.

He expressed satisfaction at the large number of youths exhibiting as entrepreneurs, with a higher number of them being female. “They are moving in the right direction. They are creating and securing their future. I congratulate and encourage you to grow your business”.

In his own contribution, Prof. Benedict Oramah, President of Afreximbank, said that, rather than being an ending, the day marked the beginning of a movement to move Africa forward.

He expressed satisfaction at the many successes recorded during the fair, saying, “We’ve shared trade, investment and marketing information; introduced buyers to sellers and investors to investees; signed trade deals; and exhibitors showed their goods and services.”

Prof. Oramah commended the African Union for its support to the trade fair and said that it was a reflection of the transformation of that institution from a political organisation into an engine for economic progress in Africa.

Sherine El Shorbagi, CEO of Egypt’s Export Development Authority, expressed her country’s satisfaction at hosting the trade fair and commended the success of the event.