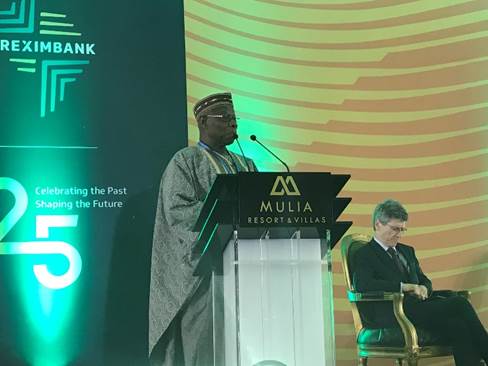 The two personalities, who were the guest speakers at the international lecture series introduced by the African Export-Import Bank (Afreximbank) in 2017 to honour the late Dr. Babacar Ndiaye, said that such a fund will ensure that every child in Africa got a full high-quality education in this generation.

They called on African leaders to support the fund and to make a commitment that every African child should be empowered and financed to stay in school until completing his or her secondary education.

“Africa needs to support every child to stay in school through age 18 and to achieve 100 per cent secondary school completion,” said Prof. Sachs, who is Director of the Center for Sustainable Development at Columbia University, New York. He noted that three quarters of African children were currently not completing secondary education and said that with an African fund for education and commitment by African leaders, the continent will be transformed into a middle income to high income economy.

Prof. Sachs argued that the current global disequilibrium was working to Africa’s benefit as it presented the African Union (AU) with the opportunity to fully realize its potential as a great unifier, saying that Africa should be a politically and economically unified region.

“The AU is the right vision and the right instrument for Africa’s unity,” he said. A unified Africa would be largest region in the world and could become a global leader by taking advantage of the most recent technological advances and with the introduction of open boarders of trade.

Prof. Sachs said that the current disruption of technology had brought about dramatic technological revolution in a way that worked to Africa’s advantage as the continent could leapfrog development through the adoption of digital technologies.

With digital technology and e-commerce, Africa could make revolutionary advances in health care, education, the functioning of the private sector economy and other areas, he added. To achieve that, Africa needed develop infrastructure and train people in the new technologies.

President Obasanjo, laying out his support for the Africa fund for education, argued that there was no shortage of money for good causes in Africa. According to him, people only wanted to know that their money would go where it was supposed to go and that such money would be properly accounted for.

He added that it was up to Africans to develop their continent, saying, “Africa is the architect of its own future”.

In his address, Prof. Benedict Oramah, President of Afreximbank, said that the greatest problem of Africa was the neglect of Africa by Africans.

Prof. Oramah said that the call to establish an African fund for education should be seen as a call to action by everyone and pledged that, even though education was not a mandate of Afreximbank, the Bank would support the effort to make sure that it emerged.

The lecture series recognises and immortalises Dr. Ndiaye, who was President of the African Development Bank (AfDB) from 1985 to 1995, for his many important contributions to Africa’s economic development, in particular, his critical role in the creation of Afreximbank.

In addition to helping the AfDB to earn triple ‘A’ status, Dr. Ndiaye, who died in July 2017, was also behind the creation of several other continental institutions, including Shelter Afrique and the African Business Roundtable. He is credited with fostering the emergence of many young entrepreneurs who are helping to build Africa today.