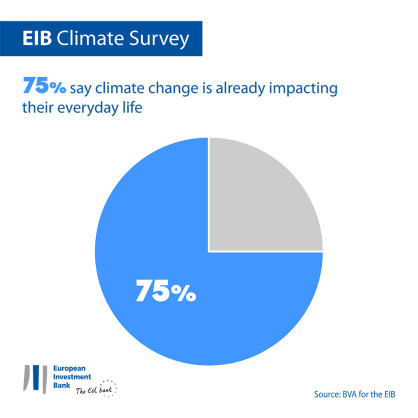 These are some of the key findings from the first African edition[i] of the European Investment Bank’s (EIB’s) 2022 Climate Survey. The EIB is the lending arm of the European Union and the world’s largest multilateral lender for climate action projects. Since 2018, the EIB has conducted similar large-scale climate surveys across Europe, China and the United States.

«These results show that Angolans are aware of the negative impact that climate change is having on their lives and the need from authorities and international organizations to assist them in accelerating the transition to renewable energy and reduce risky and unproductive dependency on food imports”.

“Angola has great potential for increasing investments in renewable energy. To address rural demand, the country is pursuing the development of small-scale off-grid projects, using both fossil fuels and renewable technologies such as solar, wind and small hydropower. While hydropower accounts for almost two-thirds of Angola’s installed power generation capacity, new renewable energy sources have the potential to further expand the country’s generation capacity – and decrease its dependence on fossil fuels. Beyond renewables, the EIB has provided support to Angola to unlock the development of advanced telecommunications services and to improve access to drinking water, and is working towards increased health resilience.”

The survey results confirm that climate change has negatively affected the livelihoods of Angolan people, with 57% stating that their income has been affected. These losses are typically due to severe drought, rising sea levels or coastal erosion, or extreme weather events such as floods or hurricanes.

More than half of Angolans (59%), slightly above the African average of 57%, say they or people they know have already taken some form of action to adapt to the impact of climate change. Some of these initiatives include investments in water-saving technologies to reduce the impact of drought and drain clearing in advance of flooding.

Although the formal economy in Angola is dominated by the oil and diamond industries, it is estimated that 85% of the working population is employed in the agriculture sector. Despite this, Angola is a net food importer and hence vulnerable to job and food insecurity due to climate change.

When asked about the sources of energy their country should invest in to combat climate change, 84% of Angolan respondents (compared with the African average of 76%) say renewable energy should be prioritised, far ahead of fossil fuels (8%).

Decades of civil conflict in Angola destroyed much of its infrastructure and prevented substantial investment in infrastructure and utility companies outside the major cities. Approximately 60% of the population live in urban areas, with limited public services outside these areas. The EIB is committed to supporting the country’s efforts to meet its energy needs, by providing universal access to energy and making progress towards the increased use of low-carbon sources of energy, and supporting its ambition to link Angola to the Southern African Power Pool.

The EIB has operated in Africa since 1965. Since then, the EIB has invested €59 billion in 52 African countries, supporting infrastructure projects, innovative firms and renewable energy schemes, in the public sector and private companies, from microenterprises to the largest multinationals.