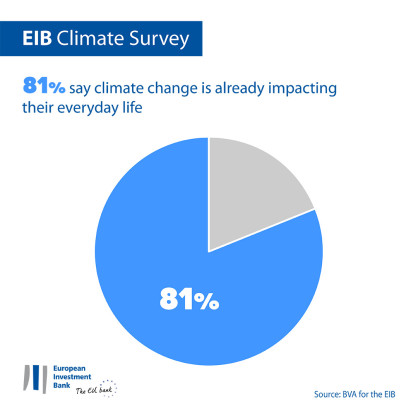 These are some of the key findings from the first African and Middle Eastern edition [1] of the European Investment Bank’s (EIB’s) 2022 Climate Survey. The EIB is the lending arm of the European Union and the world’s largest multilateral lender for climate action projects. Since 2018, the EIB has conducted similar large-scale climate surveys across Europe, China and the United States.

“It is a very encouraging insight from the EIB Climate Survey that three-quarters of Jordanians say renewable energy should be prioritised. The EIB has a long-established relationship with the Hashemite Kingdom of Jordan and has supported sustainable investments in water, energy, health, education, urban development and transport. The EIB has provided €779 million to help finance water supply projects, sanitation and irrigation in a country that suffers severely from water scarcity. The EIB is working closely to support the government of Jordan in reaching their target for climate actions focused on adaptation and mitigation.”

The survey results confirm that climate change has negatively affected the livelihoods of Jordanian people, with 55% stating that their income has been affected. These losses are typically due to severe drought, rising sea levels or coastal erosion, or extreme weather events such as floods or hurricanes.

Just over half of Jordanians (52% vs. the African and Middle Eastern average of 57%) say they or people they know have already taken some form of action to adapt to the impact of climate change. Some of these initiatives include investments in water-saving technologies to reduce the impact of drought and drain clearing in advance of flooding.

When asked about the sources of energy their country should invest in moving forward, 77% of Jordanian respondents (compared with the African and Middle Eastern average of 76%) say renewable energy should be prioritised, far ahead of fossil fuels (12%).

The EIB has a long-standing relationship with Jordan, which dates back to 1979, and has provided over €2.3 billion for long-term public and private investments across the country.

More findings from the first African edition of the EIB Climate Survey: https://bit.ly/3GPds42