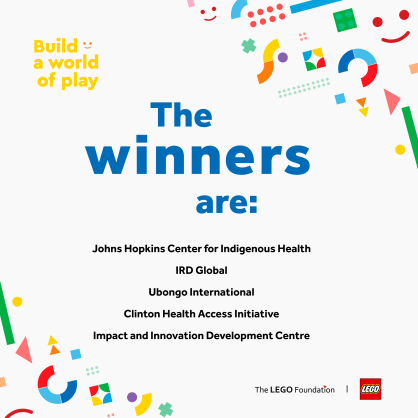 Africa’s leading creator and producer of children’s educational media, Ubongo (www.Ubongo.org), is delighted to announce that it has been chosen as one of the five recipients of the Lego Foundation’s global Build a World of Play Challenge to fund bold, innovative and impactful solutions focused on early childhood. The LEGO Foundation is awarding a total of DKK 900 million (approximately US$ 117 Million) to support organisations that make substantial contributions to the lives of children from birth to six years old and spark a global movement to prioritise early childhood development. Ubongo’s project, Akili Family (https://bit.ly/3iHnT1o), has received $27.8 million dollars.

Ubongo creates and distributes localized learning resources through TV, radio, digital, and mobile to over 31 million families in 23 countries in Africa. Ubongo plans to scale its Akili Family program to bring play-based early learning resources directly to children and their caregivers at home. Akili Family packages pre-primary “edutainment” with caregiver support content in an effort to build an “Africa of Play.”

The Build a World of Play Challenge was launched on February 16, 2022, by the LEGO Foundation to address a global early childhood emergency, characterised by a lack of access globally to quality services and supports that are needed during the critical early years of a child’s development – an emergency which has been exacerbated by the COVID-19 pandemic. The awards reaffirm the LEGO Foundation’s commitment in the LEGO® brand’s 90th year to ensure children globally are given opportunities to realise their full potential by learning through play.

“African kids have the potential to transform the world as we know it. With this opportunity, millions more children across the continent will grow up with African learning experiences that are designed for them and with them. Their parents and caregivers will also be motivated and inspired to support them as they discover the world and themselves, and become lifelong learners. I’m excited to see what the continent and the world will look like 20 years from now, given the catalytic impact of the support from the LEGO Foundation,” said Iman Lipumba, Ubongo’s Director of Communications and Development.

The Challenge received a total of 627 valid proposals from 86 countries, from which ten finalists were selected. Applicants were evaluated by multi-disciplinary experts from across the world based on four criteria: whether they were impactful, feasible, community-centred, and sustainable. The awards announced today will help in furthering specific bold projects which promote the well-being of children, their caregivers, and their communities, using culturally relevant and sustainable approaches.

“We are uniquely prepared to ‘build an Africa of play’, not only because Ubongo’s characters are African kids’ best friends and teachers, but also because we are a key player at the center of early learning and development in Africa. Our biggest collaborators are kids themselves – we co-create content they can relate to and understand,” added Ms. Lipumba.

By 2028, Ubongo will build an ecosystem of partners to provide more than 65 million families in 49 countries with play-based early learning resources in more than 20 local languages. Akili Family will improve kids’ cognitive, social, and emotional skills; empower caregivers to support learning through play, and build an understanding of and demand for learning through play.

Thomas Kirk Kristiansen, Chairman of the LEGO Foundation Board of Directors, said: “As part of the LEGO brand’s 90th anniversary, the LEGO Foundation made a commitment to help build a better world for young children to thrive. The Build a World of Play Challenge is designed to do just that, by funding innovative projects that make a real difference for global childhood development and give young children a better start in life. Congratulations to all the recipients, who have all demonstrated game-changing solutions. We look forward to working alongside them as long-term partners, to invest in children’s futures.”

The LEGO Foundation partnered with Lever for Change (www.LeverforChange.org) a non-profit affiliate of the John D. and Catherine T. MacArthur Foundation, to manage the Challenge process.  Lever for Change connects donors with bold solutions to tackle the world’s biggest problems – including issues like racial inequity, gender inequality, lack of access to economic opportunity, and climate change.

More details on the Build a World of Play Challenge can be found at https://bit.ly/3FeCokM

Distributed by APO Group on behalf of Ubongo.

About Ubongo:
Ubongo is Africa’s leading producer of kids’ edutainment. As a non-profit social enterprise, we create fun, localised and multi-platform educational content that helps kids learn, and leverage their learning to change their lives. Ubongo reaches over 32 million families across Africa through accessible technologies like TV, radio and mobile phones. Learn more about Ubongo at www.Ubongo.org