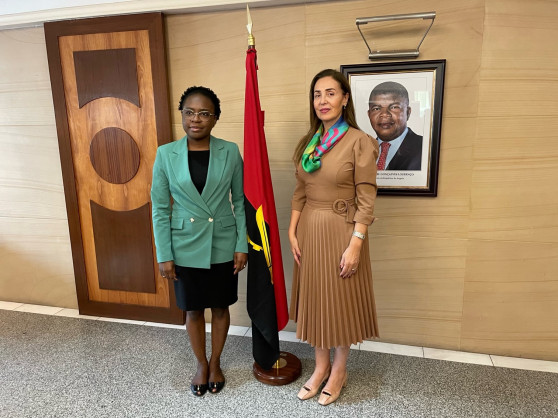 At the end of a three-day official visit to Angola, African Development Bank Group’s (www.AfDB.org) Director General for Southern Africa Leila Mokaddem has commended the Lusophone nation for its ongoing economic reforms.

Mokaddem visited Angola from 8 to 9 November 2022 where she met with members of the government in key portfolios. Her visit focused on the preparation of a new strategic framework to guide the African Development Bank’s support to Angola’s economic transformation.

Accompanied by Pietro Toigo, Country Manager for Angola, the delegation heard about key economic priorities to be outlined in the forthcoming National Development Plan. The director highlighted Bank initiatives to accelerate youth employment and encouraged the engagement of the private sector in delivery of infrastructures through PPPs and highlighted options for acceleration of investment in agriculture.

Concluding her visit, Mokaddem said: “I was impressed with the remarkable economic and fiscal reforms that Angola undertook during a very difficult global situation. Having stabilized the economy and created fiscal space, Angola can now invest to upgrade its infrastructure, stimulate private sector and accelerate employment creation. The African Development Bank is ready to support the country in this effort towards economic transformation”.

Angola has been a shareholder of the Bank since 1977. The African Development Bank in Angola has a portfolio of $1.05 billion distributed across four its High Five priority areas: Power Africa (44%), Improve the quality of lives for the people of Africa (31%), Feed Africa (17%) and Industrialize Africa (8%). Its operations focus on five sectors: Power, Agriculture, Social, Finance, Water&Sanitation.

Israelis and Palestinians to Fly Together to the International Federation of Association Football (FIFA) World Cup Qatar 2022™Africa’s Energy Transition at Conference of the Parties (COP27): Taking an Honest Look at Africa’s Renewables Capacity (By NJ Ayuk)