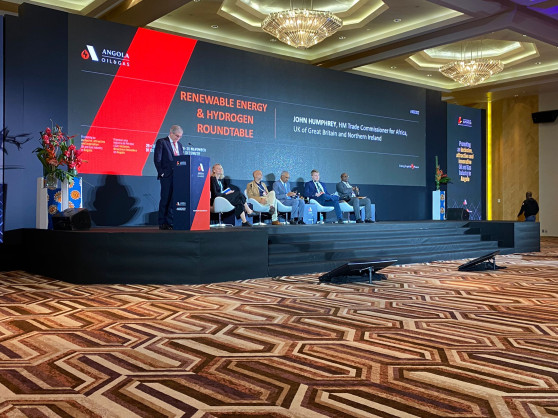 Committed to developing the country’s burgeoning renewables sector by harnessing its vast untapped solar and wind resources, and with hydropower already accounting for nearly two-thirds of domestic power generation, the Angolan government has set a target of ensuring renewable energy (https://bit.ly/3ESBcmT) comprises 70% of Angola’s energy matrix by 2025.

The session opened with a brief presentation by John Humphrey, His Majesty’s Trade Commissioner for Africa, United Kingdom, who stated, “With Angola’s vast potential in hydro, solar, and wind power, we see significant opportunities for businesses to support the country’s pursuit of human development and energy diversification. Angola currently finds itself to be in a strong position in terms of Africa’s energy transition.”

“Whenever we are talking about the energy transition of Angola (https://bit.ly/3OL4ust) in a generic form, perhaps it should be noted that the government could participate more freely in participating and contributing towards the diversification of the country’s energy mix,” stated Vita Mateso, Coordinator for Biofuel at the ANPG, adding, “The country should focus both on its fossil fuel and renewable energy potential. We can clearly see the efforts being made in order to take advantage of our renewable energy. We have the potential in terms of solar and wind and we are seeing feasibility studies being conducted throughout the southern part of the country.”

With the potential to add up to 55 GW of new generation capacity and strengthen its supply network for rural and urban areas, The Angolan Government has implemented a series of public-private partnerships to enable project financing while opening the market to private sector participation.

“Angola has the potential to be essential towards the global energy transition (https://bit.ly/3Vgm7CK),” stated Eden Clayton, Country Director for the Angola-UK Department for International Trade, highlighting that, “We can see that we have renewables competing with other forms of energy in Angola, but that energy is also competing with other markets in Angola. Therefore, we need to secure commercial power agreements that are actually viable.”

Providing an opportunity for increased renewable energy-based mini-grids for rural consumers, a wide range of policies and programs, such as the National Program for Rural Electrification of Rural Areas and the 2025 Long Term Strategy have positioned Angola to achieve a rural electrification rate of 60% by 2025, with the country’s Ministry of Energy and Water currently in the midst of deploying 30,000 off-grid systems with a total capacity of 600 MW.

“How feasible our goal is will depend on financing and politics in terms of how far we want to go in terms of the transition process,” stated Nuno Gomes, Vice-President at ASEAR, adding, “We will need more renewable energy than what the oil and gas industry can give us. This is a mandatory situation. It’s not a choice. What Angola is doing is we are building a new future for Africa. we must do it because this is no longer a transition. This is a reality, and it is feasibly.”

Meanwhile, poised to become a leader in hydrogen development, with plans to build a green ammonia factory in the country, Angola will become the first supplier of green hydrogen (https://bit.ly/3ub3jc7) to Germany from 2024. The factory, which is being constructed in the Port of Barra do Dande in Angola’s Bengo Province, is expected to produce approximately 280,000 tons of green ammonia for export.

“There are schemes out there that will allow us to use various, diverse sources of renewable energy. Particularly green hydrogen,” stated Paul Guedes, Renewable Energy Director at Sonangol, adding that, “In terms of the objectives, sooner or later, we are going to get the whole matrix based on renewable energies by focusing on Angola’s strongest assets.”