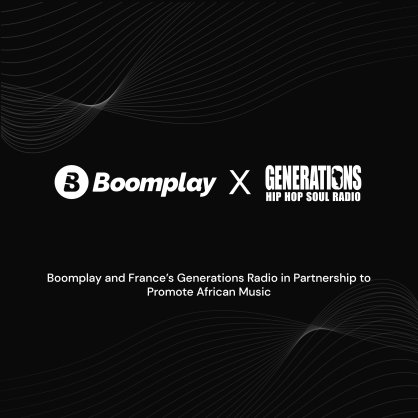 The partnership establishes the Top Africa Charts show as the first ever African music charts show on mainstream radio in France, sourced from Boomplay’s African charts and produced by Generations Radio. The show features top songs from Ghana, Nigeria, Cote d’Ivoire and many other African countries every week while spotlighting new artists, songs and key music developments across Africa.

The Top Africa Charts show broadcasts live on Generations Radio from its Paris studios every Sunday from 20h00 – 21h00 GMT+1  and assumes two broadcast formats; in French and English. The French format is a live radio show and podcast hosted by sensational OAP, Ornella and the English version is in podcast format, presented by Cleopatra, with both shows hosting special guests.

Regarding the partnership, the Director for Artist and Media Relations at Boomplay, Tosin Sorinola, disclosed, “As an Africa-focused streaming service, Boomplay is constantly seeking opportunities to promote African artists and their content. Thus a collaboration to provide more reach for African music and introduce many African artists to the french market fits our vision of empowering the African music ecosystem to unlock its potential and taking African music to the world. We couldn’t be more excited to have an influential partner as Generations Radio to realise this.”

Commenting on the partnership, Director at Generations Radio, Laurent Beauvain, also noted, “African music is today the most represented international music on our music programming at Generations. This is a big step for our radio station, which has a music editorial strategy that is mostly Hip Hop and Soul. Boomplay has the best music insights and indicators of trends and future revelations in key countries such as Nigeria, Ghana and Cote d’Ivoire. We are excited to partner with Africa’s leading streaming platform. Generations Radio continues in its mission to spotlight and empower new talents every year and is excited to be able to expand its audiences and impact in Africa as well.”

The Co-Founder and Executive Producer of Top Africa Charts Show, Cleopatra Mukula, also shared, “It was important to us to curate a partnership blueprint that puts all listeners and the artists first while simultaneously bridging the gap between young people in the francophone diaspora and Africa. Every artist playlisted on Top Africa monetises via radio play and also from all streams generated via our playlist on the Boomplay app. This is a milestone shift for African music and culture in France, and I am so proud to be part of this African story we are telling through music.”

Generations Radio is a leading radio station in France with a massive youthful listenership owing to HipHop and Soul. The station views music partnerships as an avenue to further amplify the voice of young talents. Boomplay, as a key player in Africa’s digital music scene, has, through strategic partnerships, continued to invest in the African music industry.

The Top Africa Charts show podcast is available exclusively on Boomplay in English and French after the live broadcast. Eight pilot episodes of the show have already been introduced to listeners of Generations Radio and are currently streaming on Boomplay.

Distributed by APO Group on behalf of Boomplay.

About Boomplay:
Boomplay is a music streaming and download service provided by Transsnet Music Limited. Boomplay houses millions of songs, videos and entertainment news and allows its users to stream and download their favourite songs and videos and subscribe to access premium features such as ad-free streaming and saving music for offline play. Boomplay currently has over 85 million monthly active users (MAU) with a catalogue of over 90 million songs. The service is available globally on mobile through the Google Play Store for Android, App Store for iOS and on the web via www.Boomplay.com. The company has regional offices in Nigeria, Ghana, Kenya, Tanzania, Cote d’Ivoire and Cameroon.

About Generations Radio:
Generations is one of France’s top syndicated radio stations dedicated to Hip Hop and Soul. A multi-award winning No.1 local radio station, Generations Radio has over 200,000 daily listeners via the web and social media. The station has transmitting frequencies in Creil, Meaux and Lyon. In the last three decades, Generations radio continues to discover new artists and trends which drives its constant audience and brand growth. The radio station prides itself in always being ahead of the curve of music culture in France. Generation radio leads the French Hip Hop Movement and curates and owns one of the most established rap and urban culture charts in France.