Celebration of the World Day of African and Afro-descendant Culture (JMCA) within the framework of Rabat, African Capital of Culture

Press ReleasesCelebration of the World Day of African and Afro-descendant Culture (JMCA) within the framework of Rabat, African Capital of Culture

Celebration of the World Day of African and Afro-descendant Culture (JMCA) within the framework of Rabat, African Capital of Culture 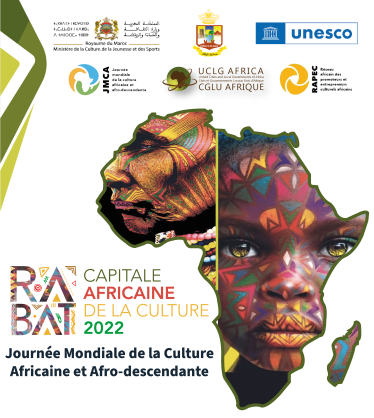 As part of the celebration of “Rabat, African Capital of Culture” under the High Patronage of His Majesty King Mohammed VI – May God Assist Him – the official commemoration of the World Day of African and Afro-descendant Culture (JMCA) is celebrated on January 24, 2023, at the hotel La Tour Hassan in Rabat (Morocco).

The African Capitals of Culture program was initiated in 2018 during the Africities Summit held in Marrakech, Morocco, by the leaders and elected representatives of the continent’s local governments grouped within their umbrella organization United Cities and Local Governments of Africa (UCLG Africa), to celebrate the artistic, cultural, and creative excellence of the African continent by designating a city which would be the African Capital of Culture for two years. Rabat has thus been designated the first African Capital of Culture for the years 2022 and 2023. The activities organized as part of the celebration of Rabat, African Capital of Culture (R.A.C.C.) are planned and implemented by an Organizing Committee chaired by the Wali of Rabat and comprising the Ministry of Youth, Culture and Communication of Morocco, the Ministry of the Interior, the Wilaya of Rabat- Salé- Kenitra, the City of Rabat, and UCLG Africa.

It is at the initiative of the African Network of Cultural Promoters and Entrepreneurs (RAPEC), and with the support of the Republic of Togo and of the African Group, that UNESCO proclaimed in 2019 during the 40th session of its General Conference, January 24 of each year as the World Day of African and Afro-descendant Culture (JMCA). This date coincides with the adoption of the Charter for African Cultural Renaissance, adopted by the Heads of State and Government of the Organization of African Unity (OAU) in Khartoum, Sudan in 1966.

The JMCA celebrates since 2020 the many living cultures of the African continent and the African diasporas around the world, and promotes them as an effective lever in the service of sustainable development, dialogue, and peace.

The commemoration of January 24, 2023 will take the form of a day of reflection introduced by an inaugural lecture delivered on the morning of the JMCA by Professor Célestin Monga of the Harvard University (United States), whose subject is: “History of Africa, History of Humanity”. This conference will be followed on the afternoon of January 24, 2023 by three discussion panels around the following themes:

– Promoting African and Afro-descendant culture in the context of the globalized economy;

– Reconciling African youth and their culture: the possibilities offered by digital technologies;

– The contribution of the Diaspora and of Afro-Descendants to the international influence of African culture.

This day of reflection will conclude with an exchange of views and ideas around the proposal for a Manifesto for the regeneration of African and Afro-descendant culture.

The official opening ceremony will be marked by speeches by:

The occasion of the commemoration of the JMCA will also offer the opportunity to the RAPEC network to award an honorary prize entitled: JMCA-KEKELI Prize. This is a prize backed by the celebration of the JMCA, to honor the personalities who work so that African culture contributes to social cohesion,  togetherness, peace, and harmony between peoples. For the 2023 edition, five personalities will receive the Kekeli Prize during the closing gala dinner.

The various media and press organizations are invited to cover the official commemoration of the World Day for African and Afro-descendant Culture (JMCA), on Tuesday, January 24, 2023 from 10:00 a.m. onwards at the Hotel La Tour Hassan in Rabat, as well as the JMCA-KEKELI Prize award ceremony during the closing gala dinner.

The Communication Department of UCLG Africa is ready to organize and facilitate appointments with the various speakers who appear in the program of the Day, provided that the media and press organs concerned submit their request to said Department at the latest on Monday, January 23 at 12:00 p.m.

As a reminder, it is at the initiative of the African Network of Cultural Promoters and Entrepreneurs (RAPEC), and with the support of the Republic of Togo and of the African Group, that UNESCO proclaimed January 24 as the World Day of African and Afro-descendant Culture (JMCA), during the 40th session of its General Conference in 2019. This date coincides with the adoption of the Charter for African Cultural Renaissance, adopted by the Heads of State and Government of Organization of African Unity (OAU) at their conference held in Khartoum, Sudan in 1966.

Distributed by APO Group on behalf of United Cities and Local Governments of Africa (UCLG Africa).

About United Cities and Local Governments of Africa (UCLG Africa):
The umbrella organization of local and regional governments in Africa was founded in 2005 in the town of Tshwane, South Africa, following the unification of three continental groups local governments, namely the African Union of Local Authorities (AULA); the Union of African Cities (AVU); and the Africa chapter of the União das Cidades e Capitais Lusófonas (UCCLA). UCLG Africa (www.UCLGA.org) brings together 51 national associations of local and regional governments from all regions of Africa, as well as 2,000 cities and territories of more than 100,000 inhabitants. UCLG Africa represents more than 350 million African citizens. A founding member of the world organization UCLG, it is the regional chapter for Africa. UCLG Africa’s headquarters are based in Rabat, capital of the Kingdom of Morocco, where it enjoys diplomatic status as a Pan-African International Organization. UCLG Africa also has five regional offices across the continent: in Cairo, Egypt, for North Africa; in Accra, Ghana, for Central Africa; in Libreville, Gabon, for Central Africa; in Nairobi, Kenya, for East Africa; and in Pretoria, South Africa, for Southern Africa.

About RAPEC:
African Network of Cultural Promoters and Entrepreneurs founded by John Ayité DOSSAVI on November 19, 2007 in Ouagadougou, Burkina Faso. The NGO RAPEC brings together cultural promoters and entrepreneurs, experts involved in the protection of heritage, women and men from the media, and culture enthusiasts. Its vision is to make culture one of the levers of development in Africa. Its approach consists in having artistic, cultural, and creative activity recognized as an economic activity in its own right, carrying immense potential in terms of the creation of wealth and jobs. The NGO RAPEC also aims at reducing certain scourges and not the least, such as poverty and exclusion, but even more, the underdevelopment in which cultural actors and entrepreneurs are anchored. With this in mind, the NGO RAPEC suggests that African States should recognize cultural activity as an economic activity in its own right. The NGO is at the origin of the First Pan-African Congress held in 2011 on the theme of  “Culture, lever of development in Africa”, in collaboration with UNESCO, with the support of the African, Caribbean and Pacific Group of States (ACP), the Government of Togo, and United Cities and Local Governments of Africa (UCLG Africa).

About African Capitals of Culture Program:
The African Capitals of Culture program is supported by United Cities and Local Governments of Africa (UCLG Africa). It aims to make culture the fourth pillar of the sustainable development of local authorities, to promote the definition and implementation of cultural policies at the territorial level, and to develop mutually beneficial partnerships between local authorities and actors and promoters of cultural activities, with a view to developing public and private ecosystems capable of making the most of culture to regenerate self-esteem and citizenship, develop decent jobs, particularly for young people and women, and contribute to the international influence of African and Afro-descendant culture.