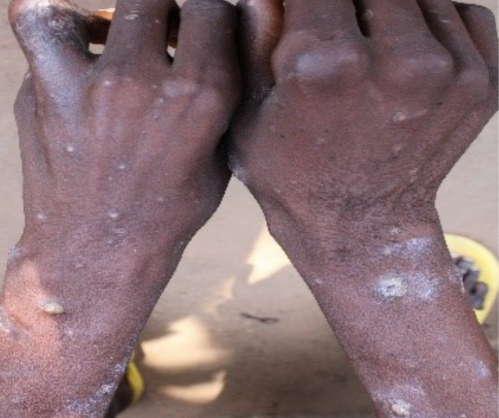 In August 2022, 31 years old Mrs Jenifer James, of Mumore community, Tongo Local Government Area in Adamawa State had just returned from the market when she developed a fever.

“It started with a headache, high temperature, body ache and later rashes all over my body,” she says in an interview, as she describes the agonizing symptoms associated with the mpox (monkeypox) disease.

Adding to the physical pain from the lesions was the mental stress because she did not know about the disease or where to go for care.

Coincidentally, Mrs James got some comfort and answers to her dilemma after some field health volunteers trained by the World Health Organization (WHO) visited her locality to raise awareness of some infectious diseases in the country and how they can be prevented.

Mrs James narrated that her encounter with the community health educators was lifesaving because she had become very disturbed when the rash came out on her body.

“I have never seen or heard of the monkeypox disease before or how to prevent or treat it.

The health educators told me a lot about the disease, how it is spread,  the preventive measures, and how I can protect my family, and assured me that it was not a death sentence. They also connected me to a health officer, who took me to a nearby health facility for treatment,” she says.

Lack of knowledge
Meanwhile, for 48 years old Philp Ezra,  an inmate at the correctional centre(Jimeta), the illness started with a fever and headache for which he was treated at the facility clinic.
His case, however, became of concern when he noticed rashes on his body.

“The rashes spread fast – from my face and covered my body – including my palms and sole of my feet. Some of the rashes contained watery fluid, whilst others had pus-like boils.

Unfortunately, Mr Philp was not the only inmate affected. Like Mrs James, Mr Philp and the other inmates were ignorant about the disease and its spread until they were diagnosed with the disease.   “I don’t know how we got it but it spread among many of the inmates because we shared beds, quarters and other personal belongings. I have recovered and stopped sharing bedding and personal belonging with others, and now wash my clothes and hands frequently, he says.

Risk sensitization campaign
Mpox is an infectious disease caused by a virus transmitted to humans from infected animals, most commonly rodents. It can be spread to other people too. The basic symptoms include swollen lymph, headache, fever, back pain, and rash and the disease has an incubation period (interval from infection to onset of symptoms) from 6 to 13 days but can also range from 5 to 21 days.

To raise awareness and reduce community transmission of the disease, the Adamawa state government in collaboration with the WHO has deployed 31 CHC to 10 high-risk local government areas in the state to provide health risk messaging on the prevention and identification of monkeypox. The CHC  conducted house-to-house sensitization across the high-burdened LGAs.

In addition, 10 Disease Surveillance and Notification Officers( DSNOs) were assigned to work closely with the community health champions to ensure prompt notification and investigation of suspected cases for fast intervention.

Furthermore, WHO has provided resources for Infection Prevention Control (IPC), case management and risk communication, surveillance and laboratory support to the State Ministry of Health (SMoH) in the fight against the disease.

mpox outbreak in Nigeria
The Nigeria Centre for Disease Control (NCDC), has recorded more than 704 cases of Mpox since January 2022. Adamawa state recorded 56 suspected cases and 16 confirmed cases as of 4 December 2022.

Two weeks after quarantine and medical intervention, Mrs James appreciates the CHC and DSNO who came to her aid.

“The pain has subsided and I am now better. I am happy with the medical attention I received at the health facility and intend to be a champion against Mpox and other infectious diseases. I have been telling people around me how they can protect themselves and the importance of keeping good hygiene and washing hands with water and soap regularly,” she says.

The Emergency Manager North East, Dr Richard Lako says WHO’s is committed to supporting the state to prevent the outbreak of infectious diseases.

He says the WHO trained the CHC to sensitize the people with risk messages on infectious diseases as they spread like wildfire at the community level if not quickly contained.
“The training and deployment of the WHO’s community health champions were made possible with funding from the European Civil Protection and Humanitarian Aid Operations (ECHO). It aims to raise awareness about infectious diseases and ensure people know what to do to protect themselves. The CHC works closely with the DSNO to ensure every suspected Mpox case is detected regardless of where they live, he says.

Likewise, the Deputy State Epidemiologist, Adamawa state, Mr Kadabiu Jones says ‘the strategy of CHC collaborating with the DSNOs have been productive and commendable because they have been instrumental to the detection of mpox cases.

The teamwork has yielded tremendous results because when such cases are found they need to be both recorded and handled with precision. On behalf of the state, we appreciate WHO for playing a pivotal role in curbing the spread of mpox at the community level across the state, says Mr Kadabiu.

Distributed by APO Group on behalf of World Health Organization (WHO) – Nigeria.