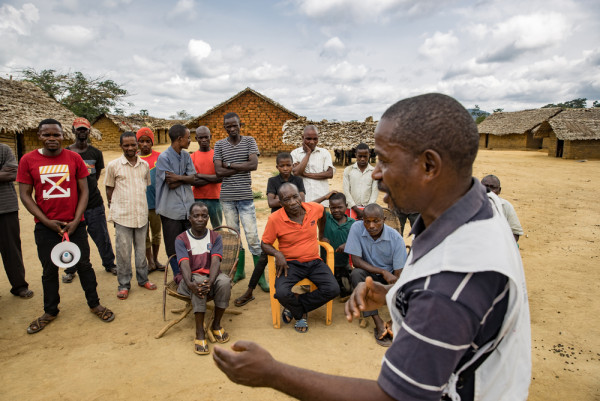 Tcheusi, five years old, is suffering from malaria symptoms. “She had been suffering from malaise and high fever for two days. To lower her temperature, her mother gave her a steam bath before going to the fields,” says her father, Manjanja. “We also gave her a remedy for her vomiting, but I see that her condition is getting worse. Unfortunately, the health centre is far from our village and transport is scarce here.”

Manjanja and his wife are farmers. They live in the village of Kimbala, several kilometres from the town of Salamabila, in the east of the Democratic Republic of Congo (DRC). They have eight children, Tcheusi is the youngest. Whenever one of their children falls ill, they treat them with traditional plants.

Many families in the Salamabila health zone, as Manjanja’s one, face obstacles to accessing appropriate care in time. As a result, people tend to go to a health facility only as a last resort.

Located in the province of Maniema, the town of Salamabila is a mining area plagued by armed conflicts, mainly motivated by the control and exploitation of minerals. Insecurity, coupled with the remoteness of health facilities, as well as the lack and cost of transport, are major obstacles to people’s access to healthcare.

“Despite our support to several health centres and the hospital, it was not enough. Some people living in remote villages were left to fend for themselves,” says Jean Nkuba, an MSF nurse in charge of decentralised healthcare in Salamabila.

In 2021, community representatives reported more than 360 community deaths to our teams, which represents 52 per cent of the total deaths recorded in the eight health areas we support1. However, most of these deaths could have been avoided with prompt care.

“We wanted to bring healthcare closer to these communities by setting up a decentralised healthcare system through community health relays,” explains Nkuba. “This approach targets the most vulnerable people in the community, i.e. children under five years old, and pregnant and breastfeeding women.”

“In the early evening, my son had severe diarrhoea. I went to the community health worker in my village who prescribed him free zinc and oral serum. It helped us during the night, but in the morning, the situation started to deteriorate again,” says Azama, the mother of an eight-month-old boy suffering from severe diarrhoea. “The community health worker then gave me a referral note to the nearest health centre, assuring me that the treatment was free. After the consultation, the health centre’s nurse transferred us to the general hospital where my son was treated.”

The community health workers are people from the community, trained by MSF, who provide care to their own community. The main aim of community-based care is to treat simple forms of malaria and diarrhoea at the earliest stage of symptoms to prevent avoidable medical complications or deaths due to late treatment.

The community health workers ensure that patients receive the necessary drugs quickly. And when patients show signs of complications, they immediately refer them to the health centre for further medical care.

They also screen for malnutrition in children under five and are trained to provide first aid to survivors of sexual violence. “The community health workers are continuously monitored, advised and guided by MSF teams,” explains Nkuba.

Community care sites, managed by the community health workers, have been deployed in 38 villages in the Salamabila health zone chosen according to their distance from health facilities and the number of community deaths from preventable complications recorded in the previous months.

The results of this approach are encouraging. From January to September 2022, nearly 33,000 consultations were carried out by the community health relays for 27,700 children and 5,200 pregnant and breastfeeding women. Thanks to decentralised healthcare, many medical complications were prevented or referred in time, avoiding potentially fatal consequences for many patients.