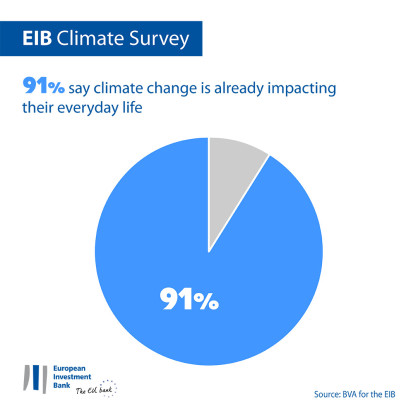 These are some of the key findings from the first African edition [i] of the European Investment Bank’s (EIB’s) 2022 Climate Survey. The EIB is the lending arm of the European Union and the world’s largest multilateral lender for climate action projects. Since 2018, the EIB has conducted similar large-scale climate surveys across Europe, China and the United States.

The results of the survey come at a critical moment for Africa, after COP 27 where the mobilization of resources for the mitigation of global warming and the adaptation to its effects were at the heart of the debates with the decisive agreement reached on a new “loss and damage” fund for vulnerable countries hard hit by climatic disasters.

“We are aware that the climate change challenge is a great one. In Côte d’Ivoire, we are experiencing a strong decline in forest cover. From 16 million hectares in 1900, we are today at approximately 3 million hectares of forests. It will therefore be for us to go from 3 million to 6 million hectares of forests by 2030. We remain convinced that with our determination in solidarity and our dedication in synergy of actions, we will succeed to build a green, ecological and prosperous Côte d’Ivoire. Let’s all get involved now because tomorrow will be too late! declared Mr. Laurent TCHAGBA, Minister of Water and Forests of Côte d’Ivoire.

“The results of the 2022 edition of the EIB’s climate survey show that the majority of respondents in Côte d’Ivoire are already facing the effects of climate change on their daily lives and sources of income. To tackle the climate challenge, the EIB is committed in Côte d’Ivoire to mitigating the consequences of climate change, developing resilient and sustainable infrastructure in the country, including the supply of drinking water, energy-efficient public lighting and the modernization of the electricity network. The development of renewable energies is also at the heart of our objectives”, said Ambroise Fayolle, vice-president of the EIB.

The survey results confirm that climate change has negatively affected the livelihoods of Ivorian people, with 63% stating that their income has been affected. These losses are typically due to severe drought, rising sea levels or coastal erosion, or extreme weather events such as floods or hurricanes.

43% of Ivorians (vs. the African average of 57%) say they or people they know have already taken some form of action to adapt to the impact of climate change. Some of these initiatives include investments in water-saving technologies to reduce the impact of drought and drain clearing in advance of flooding.

Meanwhile, 43% of Ivorian respondents say that climate change is one of the biggest challenges people in their country are currently facing, alongside other major challenges such as inflation or access to affordable housing.

When asked about the sources of energy their country should invest in as a priority, 77% of Ivorian respondents (close to the African average of 76%) say renewable energy should be prioritised, far ahead of fossil fuels (17%).