FIFA publishes report on the achievements of the transfer system reform

FIFA publishes report on the achievements of the transfer system reform 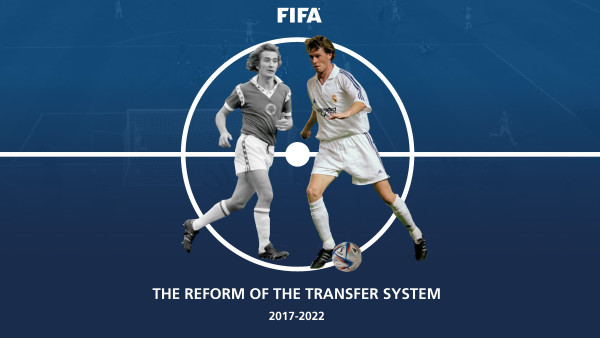 Report details the initiatives and steps that have been taken to reform the transfer system since 2017; modernising football’s regulatory framework is a crucial goal for FIFA (https://www.FIFA.com) as well as the first objective of the FIFA Vision 2020-2023; the report is now available on Legal.FIFA.com.

FIFA has today published a comprehensive document (http://bitly.ws/z95N) that details the reforms conducted within football’s transfer system during the 2017-2022 period.

Modernising football’s regulatory framework and increasing transparency, integrity and fairness within the transfer system has been one of FIFA’s key pillars since the launch of FIFA 2.0 in late 2016, and it is also the first objective of the FIFA Vision 2020-2023.

The process, which was initiated in 2017 under the direction of the FIFA Football Stakeholders Committee, represented the first wholesale review of football’s transfer system since its implementation in 2001, and thanks to the support and cooperation of the various stakeholders (FIFA member associations, confederations, ECA, FIFPRO and World Leagues Forum), it has led to many important reforms and achievements with impactful and positive outcomes for the football community.

These include, among others, the introduction of the following:

As part of FIFA’s commitment to constantly adapt the regulatory framework to the current reality of football and the transfer system, a number of other technical initiatives have been implemented, including, among others, the launch of the FIFA Legal Portal – an online platform through which proceedings before FIFA bodies will be conducted and which will gradually replace the email communication system – and the publication of an updated Commentary on the FIFA Regulations on the Status and Transfer of Players to support the various stakeholders and ensure that the regulations are applied consistently across the global football community.

The 2017-2022 reform process was also impacted by unprecedented worldwide circumstances and challenges, such as the COVID-19 pandemic and Russia’s invasion of Ukraine, which required the development of a swift and efficient regulatory response and led to temporary adjustments to the FIFA regulations.

The reform of the transfer system has also been commended and supported by the Council of Europe and the European Parliament.

Victor Montagliani, FIFA vice-president and chairman of the FIFA Football Stakeholders Committee, commented: “FIFA remains focused on accomplishing the final steps of this process, as planned with the various stakeholders, and continues to be mindful of changes within the football ecosystem in order to be ready to adapt and modernise its rules accordingly, all with the ultimate goal of creating an even better and truly global game”.

Egypt: President El-Sisi Meets with New Cadets’ Families at the Military AcademyTalks conducted by the President of the Swiss Confederation in Davos focused on security situation in Europe and the work of the United Nations Security Council