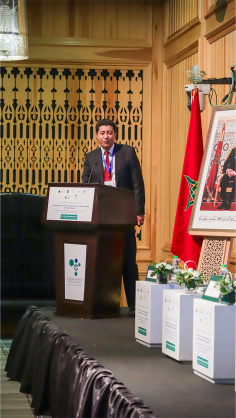 From January 19 to January 22, 2023, the Oriental Region Council and its partners organized an awareness and training seminar on “Territorial Coaching and its contributions to Sustainable Territorial Development “, at the Michlifen Hotel in the city of Ifrane, Morocco. This seminar is the result of the dynamics initiated thanks to the Territorial Coaching approach by the Council of the Oriental Region and its Partners which are: UCLG Africa (www.UCLGA.org), the Oriental Development Agency, the Mohammed The First University of Oujda, and the Belgian NGO Echos-Communication.

Council members from the Oriental Region took part in this activity, which is part of a series of seminars scheduled for 2023/2024.

The President of the Council of the Oriental Region thanked the partners who support his region and underlined the importance of training and the innovative approach represented by Territorial Coaching. “ The training of human resources in general and that of elected officials in particular, is today, in Morocco, and in the whole world, the essential guarantee of the success of all regional, national, and continental territorial development strategies. Territorial coaching is an innovative approach and is at the heart of the decentralized cooperation projects jointly established between the Regional Council of the Oriental and its partner regions of Nawa in Côte d’Ivoire, Kaolack in Senegal, Timbuktu and Kayes in Mali, and Boucle du Mouhoun in Burkina Faso. It should be mentioned that beyond these achievements, the Territorial Coaching and the Social and Solidarity Economy approach has also enabled the Oriental Regional Council to open up and extend its decentralized cooperation to other African regions, and to establish partnership agreements which are in progress with more than 13 regions”.  The President of the Council of the Oriental Region also called for the creation of a technical commission between the Council of the Oriental Region, UCLG Africa, the Oriental Development Agency, and the Belgian NGO Echos Communication to develop an action program which must meet the expectations and needs of elected officials and civil servants according to the requirements of the new context of sustainable development.

Mr. Abdelaziz Derouiche, President of the AMPCPP, expressed the wish to see territorial coaching emerge in other cities of Morocco. “Territorial coaching is very important to us. We propose to generalize this experience to all regions of Morocco. The Oriental region has set an example by sharing it with other African countries.”

For his part, the Vice-President of the University Mohammed The First of Oujda shared the initiative of his institution to launch an online training (Bachelor&Master) in territorial coaching to contribute to the development of this discipline.

The Director General of the Oriental Agency, Mr. Mohamed M’Barki, hailed the perseverance of Territorial Coaching which has made it possible to strengthen the Agency’s activities in the Region.

Mr. Oscar Kombila, President of Echos Communication, stressed the certification set up by the African Local Government Academy (ALGA) of UCLG Africa. “Our NGO brings its modest contribution to this great Territorial Coaching initiative by carrying out pilot projects alongside UCLG Africa and the other partners present here, in Morocco, Senegal, Burkina Faso, and recently in the DRC. These projects all have a common goal, namely to set Territorial Coaching in motion in Africa through Territorial Coaches certified by the African Local Government Academy (ALGA)”.

The Secretary General of UCLG Africa congratulated the Oriental Region for taking the leadership by agreeing to be the pilot region for the implementation of territorial coaching 10 years ago. “I am delighted with the holding of this first seminar, which will enable elected officials and managers of institutions in the Oriental Region to familiarize themselves with Territorial Coaching and reflect on 10 years of implementation of the program. Drawing lessons from this decade also means questioning the relevance, effectiveness, and impact of this program; to question one’s ways of doing things; to reflect on the rate of dissemination of said program if it is deemed positive, by taking into account the scale of the challenges faced by the territories by the transition from centralized management to decentralized management of public affairs; and to reach other goals. I am convinced that we will come out of this seminar better equipped to make Territorial Coaching a real lever for participatory development in African countries in general, and in Morocco in particular. UCLG Africa proposes that Territorial Coaching be considered as a protected designation of origin so that the contribution of the Oriental Region to the robustness of the Territorial Coaching approach is recognized by all, in Africa and elsewhere in the world”, concluded the Secretary General of UCLG Africa.

Ms. Khadidiatou Diop Diouf, Mayor of the Commune of Golf Sud, in the north of the Dakar Region, shared her experience on the issue of “Contributions of the Territorial Coach and animators to the management of the communal action plan”. Elected for a year, it was during the 9th Africities Summit held in May 2022 in Kisumu (Kenya), where Ms. Diouf discovered territorial coaching. Ms. Diouf has been implementing this approach in her municipality for eight months. Thanks to Territorial Coaching, the populations have become more and more involved in the development of the territory, and have developed a feeling of ownership of the projects set up on their initiative. The Mayor attributed this success largely to the involvement of the Certified Territorial Coach Abdoulaye Diarra, who now works as Special Advisor to the Mayor of Golf Sud. The latter also shared with the audience his testimony relating to his career as a territorial coach.

Dr. Najat Zarrouk, Director of Development, Knowledge Management and the African Local Government Academy (ALGA) of UCLG Africa, gave a presentation on “Territorial coaching training, results and prospects”. Dr. Zarrouk presented the results of the first three promotions, the digital journey of the territorial coaching program on the E-Learning platform of UCLG Africa, as well as the future prospects .

The elected representatives of the Oriental Region Council then took part in two Master Classes on the following topics:

The goal was to understand the logic of the Territorial Coaching approach and its tools, and to present the expected results through presentations and practical and participatory exercises that illustrate and make the link with the reality on the ground.

For more information on the Territorial Coaching Program, visit the official website https://bit.ly/3wtpewd.

Distributed by APO Group on behalf of United Cities and Local Governments of Africa (UCLG Africa).

About United Cities and Local Governments of Africa (UCLG Africa):
The umbrella organization of local and regional governments in Africa was founded in 2005 in the town of Tshwane, South Africa, following the unification of three continental groups local governments, namely the African Union of Local Authorities (AULA); the Union of African Cities (AVU); and the Africa section of the União das Cidades e Capitais  Lusofonas (UCCLA). UCLG Africa (www.UCLGA.org) brings together 51 national associations of African local and regional governments, as well as 2,000 cities with more than 100,000 inhabitants. It represents more than 350 million African citizens. A founding member of the world organization UCLG, it is the regional chapter for Africa. Its headquarters are based in Rabat, capital of the Kingdom of Morocco, where it enjoys the diplomatic status of an International Pan-African Organization. UCLG Africa is also represented in the five regions of the continent through its regional offices.

United States (U.S.) Celebrates the Premiere of “You Only Live Once” (YOLO) – Season 6Advance voting in Finland’s 2023 parliamentary elections in Tunisia