India/ Egypt: Ongoing human rights crisis in both countries must be addressed

Press ReleasesIndia/ Egypt: Ongoing human rights crisis in both countries must be addressed

India/ Egypt: Ongoing human rights crisis in both countries must be addressed 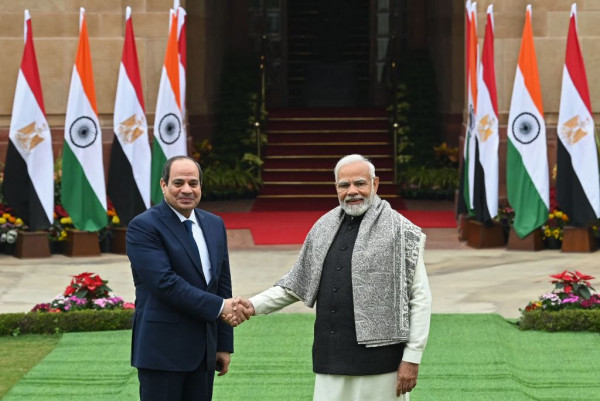 The Indian and Egyptian authorities must address the ongoing human rights and impunity crises in the two countries, Amnesty International said today, as India hosts Egyptian President Abdel Fattah El-Sisi as the chief guest at its Republic Day celebrations.

In recent years, authorities in both countries have severely repressed the rights to freedom of expression, association and peaceful assembly and failed to address entrenched discrimination against religious minorities.

“The current human rights crises in India and Egypt are characterized by entrenched impunity and misuse of counterterrorism legislation to clamp down on civic space and peaceful dissent. Both countries show striking parallels in their attempts to harass and intimidate into silence all actual or perceived government critics and opponents. This unrelenting assault on human rights must end,” said Philip Luther, Middle East and North Africa Research and Advocacy Director at Amnesty International.

Human rights defenders, lawyers, political opponents, peaceful protesters, academics and students, face arbitrary arrests and detention, unjust prosecutions and other forms of harassment and intimidation solely for their peaceful exercise of their human rights in both India and Egypt.

Thousands languish unjustly in Egyptian jails, including prominent Egyptian-British activist Alaa Abdel Fattah, who has spent most of the past decade behind bars. On 20 December 2021, he was sentenced to five years imprisonment over spurious charges of “spreading false news” for sharing a social media post critical of the authorities’ treatment of prisoners.

In India, 16 Bhima Koregaon activists have been arrested since 2018 on fabricated charges under the Unlawful Activities (Prevention) Act (UAPA), a draconian anti-terror law. They have also faced an intense crackdown by the authorities for their work for marginalized communities. Eleven of them continue to languish in prison without trial while one of them, 84-year-old tribal rights activist Fr. Stan Swamy, died in detention on 5 July 2021 after being denied timely medical treatment.

The authorities in both countries are increasingly targeting journalists, other media workers and independent media outlets, including by prosecuting them under spurious terrorism charges and using raids and office closures to harass them simply for doing their jobs. In India, the premises of independent media houses critical of the government have been raided by various government authorities. Those targeted include Newclick, Newslaundry, The Quint, Dainik Bhaskar, Greater Kashmir, Kashmir Times and Bharat Samachar.

Since 2019, Amnesty International has documented the cases of at least five journalists including Gowhar Geelani, Bilal Bhat, Rana Ayyub, Sanna Mattoo and Aakash Hassan who have been stopped from travelling outside India without any lawful justification.

Egypt remains among the top jailers of journalists in the world with at least 26 journalists currently arbitrarily detained following convictions or pending investigations into accusations of “spreading false news”, “misusing social media” and/or “terrorism”. These include 11 arrests in 2022 alone. At least 600 news, human rights and other websites remained blocked in Egypt, according to rights groups.

The Egyptian authorities have relied on repressive legislation and other tactics to control civic space and the human rights movement, including through a decade-long criminal investigation into the legitimate work of civil society organizations, known as Case 173/2011 or the “foreign funding case”. This politically-motivated investigation continues into at least 15 human rights defenders who are still also subjected to travel bans and asset freezes.

Similar action has been taken in India where authorities have used the overbroad Foreign Contribution Regulation Act (FCRA) against prominent national and international NGOs, including Greenpeace India and Amnesty International India. Under the same legislation, FCRA licences of 6,683 NGOs including OXFAM India, have either been cancelled or not renewed.

The Egyptian authorities have failed to both protect Christians from repeated sectarian attacks against their communities and bring those responsible for such violence to justice. While the 2016 law on Building and Repairing Churches has been presented by the authorities as an advancement of the rights of Christians in Egypt, in practice the law is often used to prevent Christians from worshipping by restricting their right to build or repair churches, including those damaged in sectarian attacks.

Indian authorities too have failed to prevent religious violence across the country while also perpetuating and legitimizing hate crimes and advocacy of hatred against Muslims, Christians and other minorities which have surged. Many state governments have passed laws to criminalize consensual inter-faith marriages and undertaken punitive demolitions targeting Muslim-owned properties without due process.

“India and Egypt seem to have taken their long-standing bilateral cooperation to a different level where they share tactics to increasingly repress rights and freedoms in their respective countries. As the leaders of the two countries take the centre stage, celebrations of the adoption of India’s constitution 74 years ago should not overshadow the grim reality that the human rights situations in both countries have been on a downward spiral. They must reverse course, starting by immediately and unconditionally releasing all those arbitrarily detained solely for their peaceful exercise of their human rights. They must also guarantee a safe environment for religious minorities and a reprisal-free environment for media and civil society,” said Aakar Patel, chair of board at Amnesty International India.

Distributed by APO Group on behalf of Amnesty International.