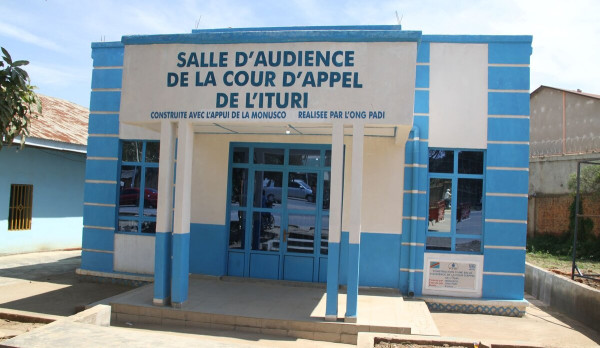 As part of its mandate to support the institutions of the Republic, MONUSCO has built and equipped a courtroom for the Court of Appeal in Bunia, Ituri province.

Marc-Karna Soro, head of the MONUSCO Ituri office, officially handed over the building to the first president of the said Court of Appeal in the presence of the public prosecutor, magistrates, and judicial staff on Wednesday, 7 December 2022 in Bunia.

“We thank MONUSCO for its support since the installation of the Court of Appeal here in Bunia. The Mission’s interventions in the judicial sector have a positive impact on the administration of justice in Ituri. The needs are enormous and MONUSCO remains one of the essential partners in providing solutions to certain needs in the justice sector,” said Claude-Francis Simbi Kabange, First President of the Ituri Court of Appeal.

In his remarks, Marc-Karna Soro recalled that this action by the UN Mission aims at combating impunity in Ituri. “Those who flout the law must be brought to justice“.

Marc-Karna Soro took the opportunity to invite the population to go to court rather than take justice into their own hands by engaging in violence. “This quick impact project just completed by MONUSCO is the UN Mission’s response to the Court of Appeal first president’s request to provide his court with a courtroom in order to help improve the working conditions of the judicial administration in Ituri“.

Before the construction of this new courtroom, it was difficult to organize and schedule hearings in Bunia.  The Court of Appeal and the High Court shared the same courtroom. This situation meant that some trials were delayed.

One court had to wait for the other to finish its proceedings before it could occupy the courtroom, resulting in postponed hearings.

The first victims of this lack of infrastructure were those awaiting trial. The most affected were those coming from distant areas for a trial and being obliged to return to their homes without appearing in court.

The 240 square meter building has one room and two offices for the judicial service. The room is fitted with a sound system, including loudspeakers and microphones, as well as furniture: tables, chairs, and a court bar.

This project, with a total cost of 44,291 US dollars, was carried out as part of MONUSCO’s Quick Impact Projects (QIP), through its Justice Support section.

It is worth recalling that MONUSCO’s mandate includes carrying out social actions for the benefit of institutions and the Congolese population. These actions are known as Quick Impact Projects (QIPs).

For example, the Mission is building bridges in the DRC to facilitate the movement of people, developing projects to provide potable water and public lighting, and building schools and hospitals. And the list is not exhaustive.