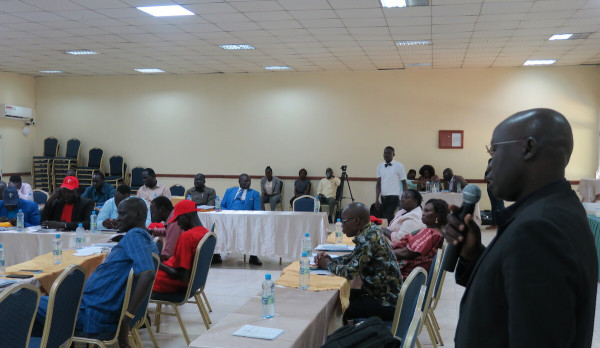 “From today on, I’ll deal with any incidences of early or forced marriage, child abductions, killings, rape, theft, or robbery, in a decisive manner,” said John Chatim, Commissioner of Duk County of Jonglei State.

Commissioner Chatim’s message set the tone for the entire conference that brought together more than 30 county commissioners from across the country and was organized and funded by the Child Protection Unit of the United Nations Mission in South Sudan, UNMISS.

His message was eloquently echoed by the Alfred Orono Orono, Chief of that unit.

“When you protect child rights, you protect the lives of everyone, including adults. If you don’t kill or rape children, if you don’t occupy schools or abduct children, you are participating in the protection of humanity as a whole,” he said.

Early or forced marriages, child recruitment, child labour, child abductions and forced disappearances, occupation of schools and hospitals, and children living on the streets are some of the problems hampering the sound development of girls and boys in South Sudan.

The recent two-day conference was part of the mission’s continued engagement with authorities at all levels to advance the protection of civilians’ mandate by ending the six grave violations against the rights of the child: the recruitment and use of children by armed actors, killing and maiming, rape and other forms of sexual violence, abductions, attacks on schools and hospitals, and denial of relief aid.

Chatim’s colleague Machot Gatluak, Commissioner of Uror County in Jonglei, said that respecting the rights of everyone first requires that the violent conflicts taking place in pockets of the country also stop.

“Fighting will lead us nowhere, only peace will,” Commissioner Gatluak said, adding that the protection of children is the responsibility of everyone, from parents and relatives to schools, authorities and military commanders.

To Margaret Fozia, Commissioner of Mundri East County of Western Equatoria State, justice for survivors of violations, be they children, women or part of other vulnerable population segments, is equally important, as accountability will deter potential perpetrators from acting out abuses.

The conference was part of series of previous events targeting county commissioners and paramount chiefs drawn from all parts of the country.