Making mental health a priority amongst community leaders in Namibia

Making mental health a priority amongst community leaders in Namibia 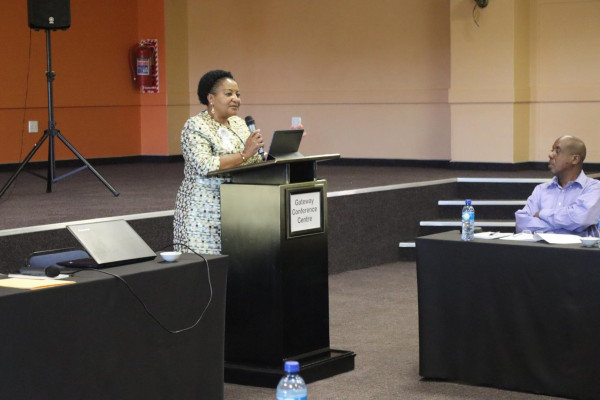 WHO Namibia supported the Council of Churches in Namibia (CCN) seminar on mental health to raise awareness on mental health promotion and suicide prevention amongst the church and community leaders and mobilize efforts in support of mental health care at community level.  The seminar with church leaders, lay counselors and youth leaders was held on 15 and 16 November as part of the World Mental Health Day commemoration.

WHO estimates Namibia suicide rate to be 9.7 in a 100,000 population.  This is the fourth highest compared to neighboring South Africa (23.5), Botswana (16.10) and Zimbabwe (14.1).   ‘Mental health is intrinsic and instrumental to the lives of all people. It influences how we think, feel and act. It underpins our ability to make decisions, build relationships and shape the world we live in. Mental health is also a basic human right. And it is crucial to personal, community and socio-economic development. It is a part of us, all the time, even when we are not thinking about it’ WHO AFRO 2022.

Speaking at the opening ceremony of the seminar, Dr Ester Muinjangue, Deputy Minister of Health and Social Services said that the upsurge in mental health conditions is a crisis leading to increase in suicide rates.  Between January 2020 and June 2021, Namibia reported 745 suicides while 1172 people attempted or thought of taking their own life.  The Ministry of Health and Social Services reported 679 suicides (559 men, 91 women and 29 children).  The children who committed suicide include 18 boys and 11 girls.

The Deputy Minister expressed her appreciation to the CCN for orienting religious and other community leaders on mental health.  She said that ‘once empowered with knowledge and skills; churches can meet the government and all health service providers half-way as they can educate the congregations and make sure they understand mental health conditions, empower those with mental illnesses on how to live positively and provide support to family members and friends of those dealing with mental health problems.’

Dr Charles Sagoe-Moses, WHO Representative, in a speech read on his behalf by Mrs. Celia Kaunatjike, WHO’s Health Promotion and Social Determinants Officer, said that COVID-19 has interrupted essential mental health services around the world including Namibia just when they were needed most.  He emphasized the role of the church in providing psycho-social support and expressed appreciation for the seminar that aims to equip leaders with skills and knowledge on how to provide first line support to community members who may need emotional support.

He said that the ‘pandemic increased demand for mental health services. Bereavement, isolation, loss of income and fear experienced during the pandemic triggered mental health conditions or exacerbated existing ones. Many people were faced with increased levels of alcohol and drug use, insomnia, and anxiety.’   These may have long term impact on mental health, and church leaders are a critical stakeholder in creating safe spaces for community members to reach out and receive professional help.

The acting Secretary General of the Council of Churches, Mr Ludwig Beukes said that the ‘church is close to the people and people feel more comfortable to talk to a Pastor about their daily challenges. The workshop is therefore an opportunity for stakeholders working in the community to be capacitated with knowledge on mental health and the increasing rate of suicide in the country.  The workshop will also enable church leaders to talk about mental health and suicide in their churches, sermons, bible study groups, youth groups and increase access to mental health care for those in their churches.’

The Ministry of Health and Social Services made a presentation on mental health and suicide prevention and provided guidance on the role of community leaders in providing psycho-social support.  CCN intends to train more religious leaders and eventually establish a network of mental health coaches in their member churches.

Distributed by APO Group on behalf of World Health Organization (WHO) – Namibia.