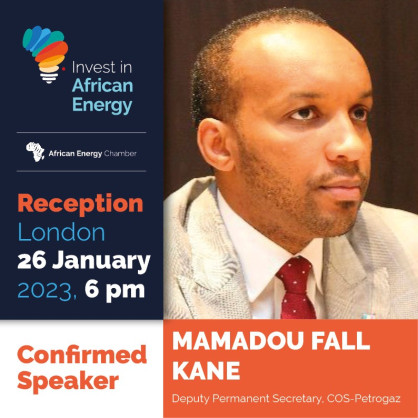 Mamadou Fall Kane, Deputy Permanent Secretary of COS Petrogaz, at the upcoming Invest in African Energy New Year Reception organized by the African Energy Chamber (AEC) (www.EnergyChamber.org) at the Waldorf Hilton in London on January 26, set to kick-off a new era of energy investment in 2023 and beyond. As Senegal approaches first gas production from its Greater Tortue Ahmeyim (GTA) megaproject later this year, the West African nation will play a critical role in shaping global energy supply discussions and bringing new gas-focused investment opportunities to the table.

The event will focus on exploring new avenues for financing large-scale, capital-intensive energy projects, mobilizing European partners, financiers and project developers to support bilateral trade and investment, and positioning African oil and gas markets as the catalyst for the continent’s energy industry and transition. Through a series of planned international energy receptions this year, the AEC – serving as the voice of the African energy sector – aims to unite global business leaders, investors and government representatives to reduce barriers to entry by foreign companies into African markets and foster greater capacity building, advocacy and diplomacy between Africa and its global partners.

As the agency operating under the authority of the Office of the President designed to strengthen, coordinate and monitor the development of Senegal’s natural resources, COS Petrogaz has been a defining figure in the country’s energy sector success to date. Working in collaboration with the Ministry of Petroleum and national oil company Petrosen, the state agency has played a significant role in advancing the country’s position as a natural gas mega hub and utilizing regional cooperation and market-driven policies to transform Senegal into a full-fledged energy economy. Prior to his appointment as Deputy Permanent Secretary, Kane served as the the Advisor to the Office of the President in the field of economics, finance and investment, as well as gained experience in economy financing and industry restructuring at the Directorate General of Treasury at France’s Ministry of Economics and Finance, The World Bank and the investment banking branch of the Credit Agricole Corporate and Investment Banking in Paris. Kane graduated from SciencesPo Paris before completing his education at Ecole Polytechnique of Paris in Economics and Public Policy.

Senegal is currently on the edge of transformation, as it prepares for first gas from the first phase of the bp-operated GTA development straddling its maritime border with Mauritania. Containing up to 15 trillion cubic feet of gas available for exploitation over a 30-year period, the project utilizes a floating liquefied natural gas (LNG) facility designed to supply approximately 2.5 million tonnes of LNG per year, with a view to driving energy security in both countries and ushering in a new era of economic growth through energy monetization and exports – including to gas-hungry Europe. Senegal is also set to produce first commercial oil through its Sangomar Field Development Phase 1 – the country’s first offshore oil project – which is anticipated to enter into production in late-2023. Operated by Woodside Energy, the field – which is located in the Rufisque, Sangomar and Sangomar Deep Blocks – is estimated to hold 230 million barrels of crude oil and is expected to produce 100,000 barrels per day.

His Excellency President Sall has played a pivotal role in fast-tracking energy development since his appointment in 2012 and subsequent series of world-class oil and gas discoveries made in Senegal between 2014 and 2017, by creating an enabling environment for business to succeed, adopting a new hydrocarbons code and attracting sizable foreign direct investments, while still providing for a strong local capacity component. Notably, President Sall worked closely with neighboring Mauritania to secure an agreement to jointly develop offshore resources for the mutual benefit of both countries and has shaped best practices for the development of cross-border resources.

“Senegal is a pioneer when it comes to regional gas monetization, cross-border cooperation and closing two multi-billion-dollar offshore hydrocarbon projects – the GTA gas project and Sangomar oilfield – in less than five year’s time. We are honored to have His Excellency President Sall, represented by Mamadou Fall Kane, attend and participate in the Invest in African Energy reception in London to recognize the achievements of the Office of the President and COS Petrogaz in bringing energy exports to the wider MSGBC Basin. Senegal can serve as an example to emerging oil and gas producers across the continent who are looking to streamline their regulatory processes and forge working partnerships with international operators,” states NJ Ayuk, Chairman of the AEC.

Taking place on January 26, 2023, the Invest in African Energy Reception Event will be held at the Waldorf Hilton luxury hotel in Aldwych, London. Participation is open to all guests. RSVP to registration@aecweek.com

The forgotten emergency of maternal healthcare in the Central African crisisPresident Ruto: We Will Deliver a New Policing Paradigm