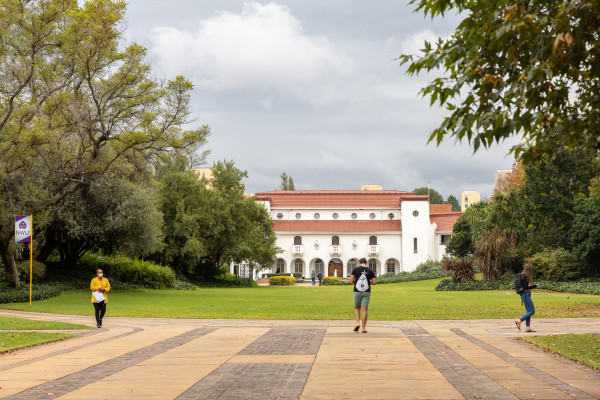 2022 has seen the inauguration of Prof Bismark Tyobeka as the third vice-chancellor of the North-West University (www.NWU.ac.za) and the start of a new era at the South African institution. The university will seek to scale up its impact on society through its internationalisation agenda and increased public-private partnerships in research and education.

Prof Tyobeka says that since the inception of the NWU the university has lived up to the demands and expectations of its stakeholders.

“However, we can do more. We are poised to achieve even more and to continue to play a key role in finding solutions for societal problems to unlock opportunities for our stakeholders. Therefore, we must strengthen our resolve to be an internationally recognised university in Africa, distinguished for engaged scholarship, academic excellence and an ethic of care.”

The vice-chancellor stated that the inauguration marks the start of a journey that will be characterised by the consolidation of the NWU’s successes and the repositioning of the university to explore new frontiers and opportunities – nationally and internationally.

Prof Tyobeka has announced a focus on key issues which will shape the future of North-West University and, by extension, its impact on South Africa and the African continent:

Prof Tyobeka said “We wish to make an impactful contribution towards building the capacity of the state, including through the partnerships that we have recently been involved in, such as the one we have with the Special Investigating Unit (SIU) (https://bit.ly/3ioN5JJ). Strengthening relations and cooperation with local government will also receive our special attention.”

North-West University has long been fostering a culture of research&development. Recently, researchers at the university have been working with colleagues from private sector companies to jointly develop, commercialise and patent products.

The university is recognised in particular for quality subject offerings in the fields of atmospheric science, clinical medicine, education, hospitality and tourism management, and public health.

The North-West University Content Hub published on AfricaLive (https://bit.ly/3FkGwBj) now serves as a guide to the critical research at the university that can uplift the region and the African continent. Key projects at the university include:

One of the most challenging anxieties of the 21st century is safeguarding food security for the world’s exponentially growing population, as stipulated by goal 2 of the United Nation’s Sustainable Development Goals (SDGs). According to projections, the global food demand is expected to rise between 60 to 98% by 2050, with a population of more than 9 billion.

Under this irreversible pressure, demand for cereals is projected to reach 3 billion tonnes by 2050. It is worth noting that in sub-Saharan Africa, increased use of nitrogen, phosphorus and potassium (NPK) fertilizers and chemical pesticides is associated with meeting SDGs to improve agricultural productivity and end malnutrition and hunger.

Now, a team of seven postgraduate students and three academic staff at the NWU are using this approach, coupled with nanotechnology, to secure future food supply while protecting our environment.

North-West University on the quest to save our freshwater sources (https://bit.ly/3F7tjvj)

South Africa’s freshwater sources are under pressure from various kinds of contaminants, and NWU researchers are searching for ways to keep track of some of the more elusive pollutants.

Prof Rialet Pieters, a researcher in the Unit for Environmental Sciences and Management, is an ecotoxicologist whose interests lie in organic chemical pollutants and their harmful effects on humans and wildlife.

Studies have determined that the quality of available freshwater is declining rapidly because of changing weather patterns, as well as human-related activity.

With the aid of thermal energy storage systems it is possible to use solar cookers to prepare hot meals at night. Some systems perform better than others though, and there is room for improvement. This is according to Prof Ashmore Mawire of the Solar Thermal research group at the NWU.

He recently gave a public lecture at which he presented past and recent research results of the group, which is located in the Material Science Innovation and Modelling (MaSIM) research focus area.

The social and economic impact of neuromuscular diseases (NMDs) is staggering.

These diseases, which include motor neuron disease and muscular dystrophies, can cause premature death or lifelong disability and are believed to affect one in every 400 people – meaning about 20 million children and adults across the globe.

There is hope on the international front, however. Precise genetic diagnoses, gene discoveries and new therapies are having a positive impact on patient care and well-being in developed countries.

This is not yet the case in developing countries with under-studied populations such as South Africa, where more research is desperately needed to develop effective genetic diagnoses and treatments for rare inherited disorders such as NMDs.

This is where the North-West University (NWU) is playing an important role, both as partner in an international collaborative study and as coordinator of the core South African team that will investigate NMD in the region.

The research highlighted that in order to tailor a plastic policy for the country, more spatial and temporal data are needed (especially for freshwater bodies). This will determine areas in need of protection, areas under highest threat, and processes that may be targeted for intervention.

Many South Africans perceive insects as disease-carriers and crop destroyers, instead of noting the crucial role they play in food security, soil improvement, nutrition and pollination.

To educate the public about this multi-million Rand industry, researchers from the North-West University (NWU) and Rikkyo University in Japan were tasked with decoding indigenous knowledge systems of the mopane worm and the edible stinkbug for the school curriculum.

Getting the Most Out Of Medicinal Plant Extracts With Nanotechnology (https://bit.ly/3XKvoVd)

A North-West University (NWU) graduate is bringing together age-old plant knowledge and the latest nanotechnology to make the most of medicinal plant extracts.

According to a United States National Nanotechnology Initiative, nanotechnology is currently revolutionising the technology and industrial sectors. These include information technology, homeland security, medicine, transportation, energy, food safety and environmental science, among many others.

MSc graduate Pule Silent Seboletswe recently conducted research into how nanotechnology can help in finding solutions for problems related to the use of natural products for therapeutic purposes.

Evaluating the Potential Of South African Medicinal Plants As A Treatment For Depression (https://bit.ly/3imG3Fy)

North-West University (NWU) academic Dr Makhotso Lekhooa is investigating the possibility that an indigenous plant can be used to treat depression.

This research is very applicable as the World Health Organisation (WHO) indicates that 4,4% of the global population suffers from depression, while in South Africa this percentage amounts to 4,6 %.

Moreover, South-Africa also has a poor response rate, with less than 50% of patients achieving remission and battling adverse side effects.

Dr Lekhooa’s research topic was “Evaluating the effects of South African medicinal plants such as Sceletium tortuosum in an animal model of depression”.

The fungus that spoils bread does not work alone. It has guests hidden deep within its cells – bacteria – with whom it has a mutually beneficial relationship that can be positive or negative for humans. Understanding and modifying this relationship can have a profound impact on the food, medical and agricultural industries.

This is the focus of a four-year international collaboration between the North-West University (NWU) and two universities in the United States.

Replacing native forests with tree plantations is harming the soil at a microbial level by having an impact on soil fertility and the health of the planet.

This is one of the conclusions of North-West University (NWU) academic Prof Olubukola Oluranti Babalola – who along with Dr Adenike Eunice Amoo – recently conducted ground-breaking research to investigate the impact of land-use change on soil bacterial communities and characteristics.

Distributed by APO Group on behalf of North-West University.