Our aprons should have no gender: Engaging men to alleviate the care burden for women in Rwanda

Press ReleasesOur aprons should have no gender: Engaging men to alleviate the care burden for women in Rwanda

Our aprons should have no gender: Engaging men to alleviate the care burden for women in Rwanda 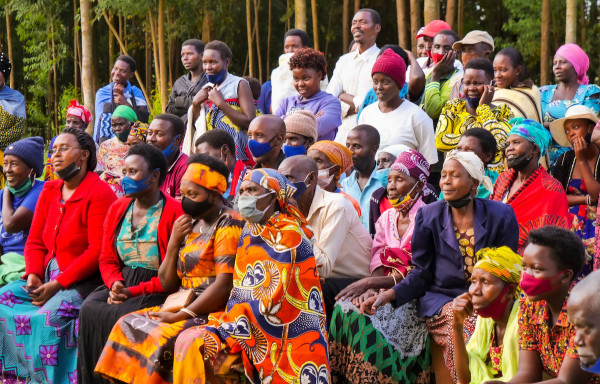 In the meeting halls of the selected sectors in Ngoma, Kirehe and Nyaruguru districts we meet 120 couples, with cases of domestic conflicts trained on gender equality for a period of three months between December 2021 and February 2022 by RWAMREC, a men’s resource organization working to promote, gender equality, positive masculinities, and engaging men to eliminate all forms of violence against women and children.

This inequality is considered as one of the factors hindering the woman’s ability to thrive, considering the time she spends engaging in unpaid care work denies her enough time on income generating activities. With partnership and financial support from UN WOMEN, RWAMREC has worked towards challenging cultural gender norms that prevent men and boys to be involved in reproductive work which constitutes a big barrier to women economic empowerment.

To date, RWAMREC in partnership with three districts in Rwanda, Ngoma, Kirehe and Nyaruguru districts successfully conducted activities including a Project Introductory meeting at district level, and training workshop of 40 male and female community leaders on male involvement in unpaid care work. This activity is part of a project under UN Women’s transformative approaches to recognize, reduce and redistribute Unpaid Care Work project through male involvement in unpaid care and domestic work, funded by Global Affairs Canada.

Nyiramayira Donatile, a mother of 7 children, resides in Nyaruguru district, with her husband of 27 years. She notes, “I used to wake up and sweep, cut grass for cows, harvest sweet potatoes, gather firewood, then cook and sometimes the sun could set still with pending things to do.”

Nyiramayira narrates that her husband was a drunkard, and he squandered their finances after selling their goats and wood without consulting her and this offended her.

Nyiramayira affirms that RWAMREC’s lessons are just on time saying, “They alleviated my stress, whenever it clocked 3 am in the morning my mind was wondering what my children shall eat along with my list of basic necessities.”

“I’m rejoicing due to the harmony we have now, unlike before when we never reasoned together, today we sit and deliberate together,” she adds.

Invest in African Energy: African Energy Chamber to Host New Year Reception in London on 26 JanuaryTanzania features as a must visit country in 2023, according to Cable News Network (CNN) Travel