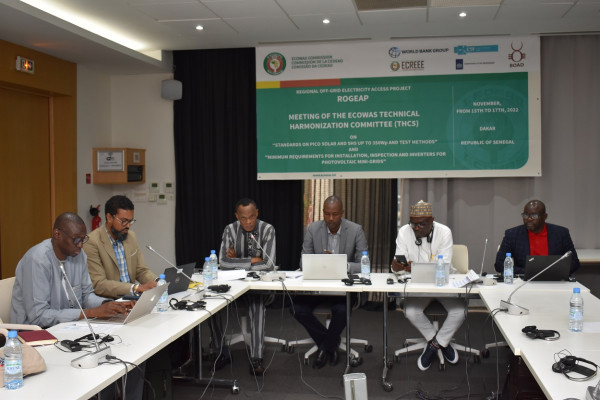 Experts in electrotechnical products standards are meeting in Dakar, Senegal from 15 to 17 November 2022 to exchange on two key themes as part of implementation of the Regional Off Grid Electricity Access Project (ROGEAP): Harmonisation of “Standards for pico-solar and solar home systems (SHS) up to 350 Wp and associated test methods” and “Minimum requirements for photovoltaic mini-grid installation, inspection, and inverters.”

The Dakar meeting has several objectives. Experts will carefully discuss the two IEC standards (IEC TS 62257-9-8:2020 and IEC TS 62257-9-5:2018) being proposed for off-grid solar systems with a PV module power of up to 350 Wp, and the test methods. The meeting will also discuss the draft national survey report on three draft regional standards regarding the minimum requirements for PV mini-grid installation, minimum inspection requirements for PV mini grids and minimum requirements for  PV mini-grid inverters in the ECOWAS region. The meeting will then align viewpoints and reach a consensus on the content of the five regional standards in order to proceed to the harmonisation phase.

Among the several participants at this meeting are experts from the THC5 and ECOSHAM Secretariat, VeraSol Consultants (a quality assurance programme supported by the World Bank for modern off-grid solar systems), representatives of the ECOWAS Centre for Renewable Energy and Energy Efficiency (ECREEE), the ROGEAP project and the World Bank.

The opening ceremony featured a series of addresses and remarks. In his opening remarks, Mr Assane Mbengue, Secretary of Senegal’s Comité Electrotechnique National (CEN), speaking on behalf of the Director General of Association Sénégalaise de la Normalisation (ASN), affirmed that renewable energy solutions providing reliable access to electricity for people in remote locations is a promising alternative to the traditional grid infrastructure.  Unfortunately, the development of such stand-alone solutions has been hampered as the market is flooded with solar systems of inferior quality that the consumers find unreliable. Hence the importance of the meeting.

Speaking in turn, Engineer Alewu Cherry Achema, Head of Electrical and Electronics Standard Organization of Nigeria and Chairperson of the ECOWAS Technical Harmonisation Committees (THC 5), thanked ECOWAS and the World Bank for the ROGEAP initiative, and reiterated the need to upgrade the standard of electrotechnical products across ECOWAS countries for the good of the citizens.

Representing the World Bank, Mr. Yuri Lima Handem, a Senior Energy Specialist, stated that his Institution placed a priority on the supply of quality energy and electrical products to the population.

In an address given on behalf of the Executive Director of the ECOWAS Centre for Renewable Energy and Energy Efficiency (ECREEE), Guei Guillaume Kouhie, Programme Officer for Renewable Energy Technologies, presented a brief history of ROGEAP and went on to state that “this meeting of the THC5 is the first meeting on harmonisation of standards for pico-solar PV systems and SHS kits, and the second on standards for photovoltaic mini-grids. This technical meeting provides a forum to discuss in detail and reach a consensus regarding the content of the regional standards, in order to move on to the harmonisation phase.”

The meeting proceedings were formally kicked off by Dr Kemji Ajoku, representing the ECOWAS Director of Industry. Giving his address, he pointed out that the international quality standards and associated test methods for off grid solar systems exist, and that Member States would work towards their adoption in the region. He concluded by inviting the participants to produce quality documents for onward validation at the ministerial meeting scheduled for December 2022 in Cabo Verde and adoption by the ECOWAS Council of Ministers and Heads of State Summit in 2023.

Recall that one of the missions of ROGEAP component 1A is the harmonisation and adoption of the regional standards and quality assurance framework for off-grid stand-alone photovoltaic systems (up to 350 Wp) for the 19 countries where ROGEAP is being implemented (15 ECOWAS Member States + Mauritania, Central African Republic, Cameroon and Chad).

The aim of the Regional Off Grid Electricity Access Project (ROGEAP) is to increase access to energy services for households, businesses, public establishments using modern stand-alone solar technology through a harmonised regional approach. It consists of two components: (1) the development of a regional market by ECOWAS, and (2) access to funding for stand-alone solar systems businesses, provided by the West African Development Bank. The project is funded by the World Bank, Clean Technology Fund (CTF) and the Directorate General for International Cooperation (DGIS) of the government of the Netherlands.