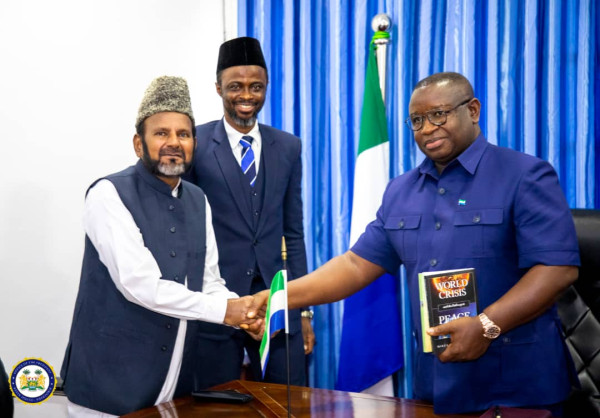 His Excellency President Dr Julius Maada Bio has received the newly appointed Sierra Leonean Amir of the Ahmadiyya Muslim Jama’at in Sierra Leone, Amir Musa Mewa Esq., emphasising that the country is proud of his blend of leadership.

The President said, “as a country, we are very proud of you. Your blend of leadership in our community is remarkable”. He welcomed a cross-section of the Ahmadiyya Muslim Mission leadership at the presidency, stressing that Sierra Leoneans, including himself, were no strangers to the work of the Ahmadiyya Mission in the country.

“Some of us grew up with friends and colleagues who attended Ahmadiyya schools. I want to formally congratulate you for the indelible mark your mission has had on the development of the country’s human capital. The footprint of Ahmadiyya is one that we are proud of because, as a government, we believe the best way to develop any nation is through the demonstration of both social and spiritual leadership,” the President said.

“You might have done your best service to the mission, but the decision to be appointed leader comes from God. This is why, as a President, I believe that we don’t have to fight for positions because everything comes from God. That is also why He is always in control. Leadership is not easy, but the same God that gives power will always guide you. So, my advice to you is to pray for God’s wisdom,” he reiterated.

While presenting the Amir to President Bio, the outgoing Amir and Missionary-In-Charge of Teaching and Learning at the Ahmadiyya Mission, Saeedu Rahman, said the mission was happy and proud to have been in Sierra Leone for the past 100 years.

The outgoing Amir, who has worked in Sierra Leone for 28 years, expressed the mission’s gratitude to President Bio and the people of Sierra Leone for everything, including accepting them to be part of the development of Islam, education, health, and agriculture, among other development activities in the country.

“At the end of the century, we are handing over the Sierra Leone Mission to Amir Musa Mewa, a young, hardworking and vibrant Sierra Leonean,” he confirmed.

The newly appointed Amir of Ahmadiyya Muslim Jama’at, Musa Mewa Esq., expressed appreciation to President Bio, noting, “It gives me great pleasure to be handed over the leadership of the mission in Sierra Leone.” He noted that for the past 100 years of the mission’s existence in the country, they had been working with normal people, sharing the faith of Allah, developing human capital, empowering locals and providing services in the health, agriculture and other sectors.

“It was an opportunity to always be invited to serve in the way of Allah. So, when my community elected me, I was appointed by the worldwide head of Ahmadiyya Mission, our beloved Hazur, Hazrat Mirza Masroor Ahmad (may Allah be his Helper), the Khalifatul of our time, as Amir of Ahmadiyya Muslim Jama’at, Sierra Leone. I accepted the appointment wholeheartedly with determination to serve,” Lawyer Mewa added.

He noted that his meeting with the President for his official presentation by the Jama’at was a very significant landmark because it meant that they had a working relationship with the government, adding that that was their responsibility because they were in the fields of education, health, and social amenities.

“Very clearly, 100 years of Ahmadiyya in Sierra Leone have left us with 309 schools nationwide, a missionary training college, hospitals, a printing press, and moral and spiritual training in our schools,” he concluded.

Distributed by APO Group on behalf of The Republic of Sierra Leone State House.