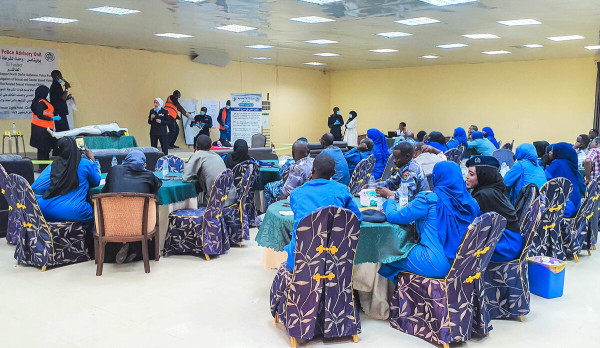 The UNITAMS-facilitated training workshop provided a forum for the participants to discuss issues related to the investigation of SGBV and CRSV crimes and ways to meet international standards. The training also aimed at building participants’ capacity and knowledge and improving coordination among all stakeholders involved in responding to violence-related crimes, which is key to the protection of civilians.

“Through the Police Advisory Unit, the entire United Nations family is working to support the Sudanese Police Force and all other actors involved in the protection of civilians. What is significant about this forum is that all protection actors within the justice chain are part and parcel of this training, and that is the power of partnership,” said Ms. Abimbola Aina, the Head of UNITAMS Regional Office in Darfur. “To make progress towards the prevention of SGBV and CRSV, all community components, including the police, civil society organizations, women’s protection networks, native administrations, and community leaders need to work together harmoniously,” she added.

Participants stressed the need to strengthen the enforcement of the law and to adapt a community-policing approach where security authorities work in partnership with communities to bridge the gap between the civilian population and the Police. They also highlighted the importance of monitoring procedures for cases related to SGBV and CRSV. They further stressed the importance of maintaining the confidentiality and privacy of information about survivors and providing victims with legal aid and psychological assistance.

Government officials, including Eissa Zarouq, a representative of the Governor (Wali) of North Darfur, and Umaima Adam, the Governor’s Advisor for Gender Affairs were present at the workshop and stressed the need to protect women and girls who suffer disproportionately from conflict and outbreaks of violence. Police Brigadier, Saad Mustafa, Head of the Criminal Department of the North Darfur State Police, thanked the UNITAMS Police Advisory Unit for its efforts in bringing together police personnel from across the state to engage in the training and discuss issues related to SGBV and CRSV.

Liu Cao, UNITAMS Police Advisor, addressed the workshop and highlighted that UNITAMS support to both government institutions and communities will continue in different forms to make progress towards preventing and addressing SGBV and CRSV.