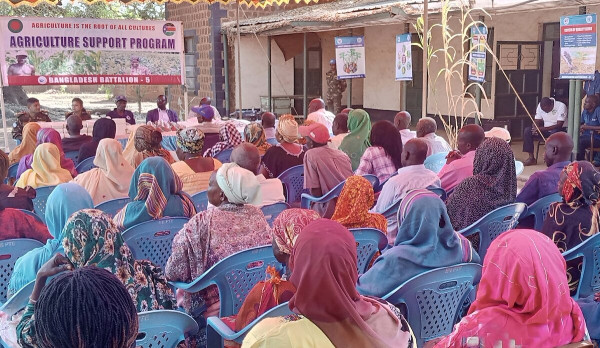 Seeds are not only amazing but also essential for anyone who wants something to grow, as farmers typically do. Their trade union in Western Bahr El Ghazal State recently received a remarkable boost by Bangladeshi peacekeepers serving with the United Nations Mission in South Sudan, who have handed over a variety of hybrid seeds to enthusiastic farmers.

“These seeds and tools may not be enough for everyone in the state, but we will distribute them to our most productive farmers and cooperatives for them to plant, nurture and harvest, to benefit as many people as possible,” commented Natale Masmino, the trade union’s chairperson.

Tomatoes, eggplants and okra will be grown, and hoes, also handed over by the peacekeepers, shall be used by the farmers cultivating the seeds. In addition, hooks for fishing and the material to make fishing nets were presented to agriculturalists with a penchant for angling.

“Most farmers in the state lack modern tools and pesticides, and during the dry season, water resources also become scarce,” said Mr. Masmino, who also called for capacity building efforts to be made for agriculturalists to become more productive.

“Food security is vital, and that is why we are doing what we can to support farmers and, by extension, the population as a whole,” explained Lieutenant Colonel Synthia, coordinator of the civil-military activities conducted by the Bangladeshi contingent in the state.