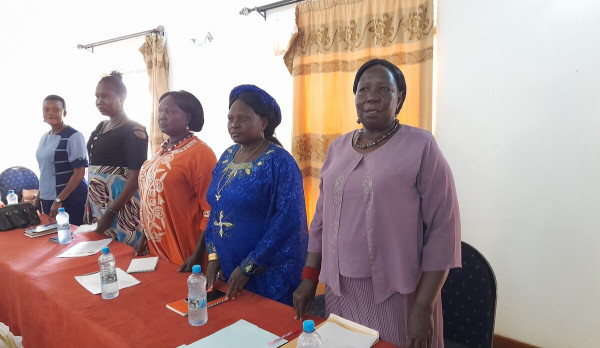 As South Sudan, the world’s newest nation, gears up for its first-ever free, fair, and credible elections, efforts to ensure the voices of women are equally represented in all aspects of leadership, decision-making and governance are on the rise.

In this regard, recently a women’s parliamentary caucus has been established within Eastern Equatoria state’s legislative assembly.

The aim: To ensure that issues directly impacting women are front and center.

“The main purpose of instituting this group is to create a common interface that brings together women parliamentarians,” revealed Angela Achiro Onorio, Chair of the new caucus.

“Our coalition draws its legitimacy from the fact that women members of parliament are part of the core working group,” she adds.

The caucus and its 13 executive members are expected to promote women’s participation in public life, plus advocate for an increase in female representation within the state’s government.

Its launch was supported by the United Nations Mission in South Sudan (UNMISS).

Caroline Waudo, Head of the UN Peacekeeping mission’s Field Office in the state’s capital, Torit, appreciated this step forward in upholding the rights and needs of South Sudanese women.

“This committee is for you to empower women in leadership and to contribute in a meaningful way on issues affecting your constituents and society in general. It’s also an opportunity to advance gender equality across the state,” said Ms. Waudo, addressing the launch.

This inclusive measure is designed to be a tangible signal to women across Eastern Equatoria – whether in their neighbourhoods, their larger communities, or as political actors – that their experiences are valid and the caucus is a safe space to build supportive networks so that they can achieve their full potential as changemakers.

“This group of women are empowered to progress and advance interest of women, girls and communities as a whole. Women make up 50 per cent of our society and their contributions are critical in shaping a peaceful, prosperous and developed South Sudan,” stated German Charles Ojok, economic affairs adviser to Governor of Eastern Equatoria, Luis Lobong Lojore.

The newly formed caucus will enable women parliamentarians to meet frequently, interact and share information, to be better informed about a wide range of social concerns and meaningfully deliberate on resolving these.