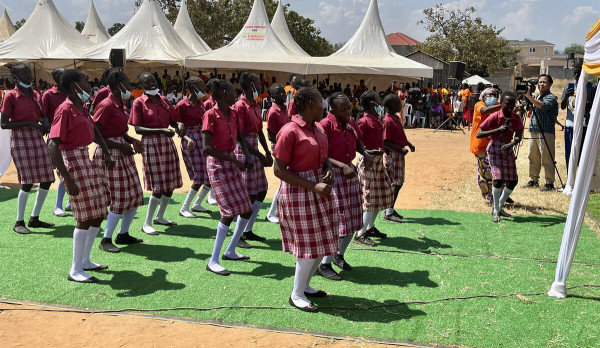 Jacqueline herself had a powerful message to give while performing for a nearly 2,000-strong audience at a meaningful event organized by the United Nations Mission in South Sudan (UNMISS) in partnership with South Sudanese women leaders from Gurei, a suburb in Juba, the capital city of the world’s youngest nation.

The focus of the event: raising awareness on the need to end sexual exploitation and abuse (SEA).

Led by the UN Peacekeeping mission’s Conduct and Discipline Team (CDT), the activity, termed ‘Stand Down Day,’ was held under the ambit of the ongoing 16 Days of Activism.

“Violence against women doesn’t only happen in South Sudan. It happens across the world. So, we need every woman to understand the importance of standing up for their rights. Sexual exploitation and abuse falls within the parameters of gender-based violence and our objective is to connect with groups of women to explain that, as the UN family, we are their partners in this fight,” said Christine Bessong, Team Leader of the outreach arm of UNMISS CDT.

Local communities, women’s groups, representatives from UNMISS and the UN Agencies, Funds and Programmes came together in this colorful experience.

Jacqueline’s song set the tone for the day as she soulfully rendered lyrics that spoke to harmful cultural practices—such as dowry and forced or early marriages—that have impacted women and young girls in South Sudan negatively.

She is familiar with the sentiment of her own song, having witnessed many of her female relatives dropping out of school.

“Many of our friends suddenly disappear from school and we later hear that they have been married off,” she reveals.

Jacqueline and fellow learners from the Straight Link Orphanage, who performed with her on the day, are, therefore, justifiably keen that their simple but eloquent message for equal rights cascades down to every community member.

“Our job is to create a supportive environment for survivors of such abuse and build their skill sets and confidence. Livelihood trainings are essential for women to be economically empowered,” she states.

Ms. Elikana’s words are echoed by Mirriam Aguli, Advisor, Women and Children’s Affairs, Central Equatoria. “Education for girls is a necessity. Women and girls make up 50 per cent of any society. For peace and development to come to South Sudan, we must be fully included in leadership, governance, and decision-making. The fight for equal rights and an end to violence against women is everybody’s responsibility,” she averred.

Dancing, music, stirring speeches and a timely reminder for all to ensure prompt reporting of any instance sexual exploitation and abuse through community focal points and a dedicated hotline were highlights of this advocacy effort.

For her part, Ms Bessong underscored the importance of involving communities at the grassroots to end violence against women and girls.

“We all have the power to do something. If we come together and let everyone know that the UN condemns sexual and exploitation, you will be helping us eliminate it forever.”