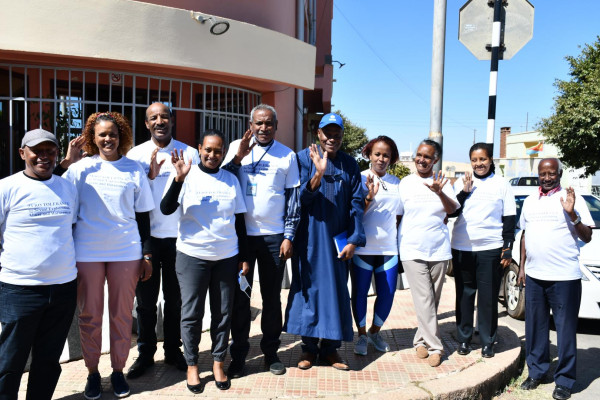 WCO Eritrea staff conducted in-house training on preventing and responding to sexual exploitation, abuse, and harassment in the WCO Conference Hall on 2 December 2022.

Staff members had an in-depth discussion on the subject and shares among themselves different examples.

Mrs. Lemlem Asfaha, the Budget and Finance Assistant and WCO focal person on PRSEAH facilitated the training. She emphasized on key messages relating to sexual harassment. She said that Employees should treat all colleagues with courtesy and respect, be aware of how their own behavior may be perceived and take action where appropriate.

All WCO staff members, including the WHO Representative for Eritrea, Dr Martins Ovberedjo participated in the training. Dr Martins gave elaborations with different examples so as to be careful on what to do or say to be on the safe side based on the recipient, a culture which differs from country to country and people to people. He called on all staff to familiarize themselves with PRSEAH. Dr Martins said that “You can disagree, but never ever retaliate; there is zero tolerance.”

The main objective of the training was to strengthen understanding and familiarize staff with diverse forms of sexual exploitation, abuse, and harassment in order to prevent or avoid SEAH from happening. It was noted that gender-based violence is an umbrella term for any harmful act that is perpetrated against a person’s will, and that is based on socially ascribed (gender) differences between males and females. The term includes acts that inflict harm or suffering of a physical, sexual, or mental nature, threats to commit such acts, coercion, and other forms of deprivation of liberty.

Dr Assefash Zehaie, NPO/PHO made a presentation based on the Eritrean context. She pointed out some examples like early marriage and female genital mutilation are practical examples of gender-based violence and the country is making several efforts to totally avoid them. Dr Assefash added that in the 2010 Demographic and Health Survey (DHS), some indirect indicators showed that a lot of women and men accept wife beating culturally as normal. About 32% of women and 22% of men said that a husband can beat his wife. However, this needs to be addressed.

WHO in 2018 supported MOH on the adaptation of gender-based violence policy guideline which was also shared with other partners and helped in the increase of skill and knowledge of health care workers.

Press Release Regarding the Visit of His Excellency Dr. Mamadou Tangara, Minister of Foreign Affairs, International Cooperation and Gambians Abroad of The Gambia, to TürkiyeQatar’s Embassies and Consulates Continue to Celebrate Qatar National Day