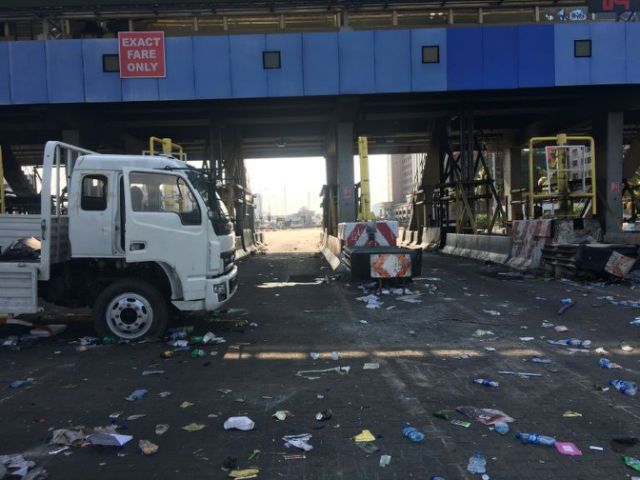 Nothing is left of the party atmosphere that filled the protest ground in the centre of Nigeria’s biggest city Lagos — except for broken glass and graffiti denouncing police violence.

The day after security forces opened fire on peaceful protesters gathered to push for better governance around 20 soldiers and police were now in control, chatting or sleeping on the ground.

A few street children gathered up the rest of the debris from in front of a towering tollgate, looking for something to hawk: bent pieces of steel, smashed metal scraps, smashed signs.

Africa’s largest city Lagos, which usually overflows with life, was a ghost town on Wednesday as its 20 million inhabitants woke up under a curfew imposed by the authorities.

Residents were still digesting shock of the images, viral videos and live-streamed footage of those dreadful last moments of the protest on Tuesday evening.

The attack on the roughly 1,000 protesters who had gathered in defiance of the order to go home left at least 10 dead at this location, Amnesty International said

Two protesters were killed at a second spot and hundreds wounded overall, the rights group said.

“We didn’t have a stick, neither a gun, nothing nothing, all… we were holding is a flag,” said protester Larry Matthew.

“All we were saying is ‘Peace Peace Peace”, but the soldiers refused. Before we knew it, they offed the camera, and then they offed the lights and they started shooting sporadically,” he told AFP.

“Ah, it was brutal. It was terrible. I’ve never experienced anything like that in Nigeria before. No one can deny this, not even the governor: why did they switch off the lights and start killing people?”

All witnesses recounted how just before the attack the street lights and the huge electric advertising boards overlooking the scene were turned off, plunging the protesters into darkness.

An AFP journalist also saw workmen in overalls taking away surveillance cameras from the scene roughly one hour before security forces appeared.

Rights activists said that these moves suggested clearly that the violence that followed was premeditated and the perpetrators were trying to hide any evidence.

The governor of Lagos at first said there had been no fatalities, before admitting authorities were investigating one death from “blunt force trauma to the head”.

The army dubbed as “fake news” reports that soldiers had fired on demonstrators, despite the footage that spread widely online.

“They came around 7pm when everywhere is dark. We had no idea because we’ve been here for like two weeks.”

Not having slept, eaten or drunk for 24 hours, he wandered the empty streets of the business district near the scene with about a dozen friends.

All the shops were shuttered and transport halted by the lockdown order.

“We are the poor, we were just fighting for our rights, he said.