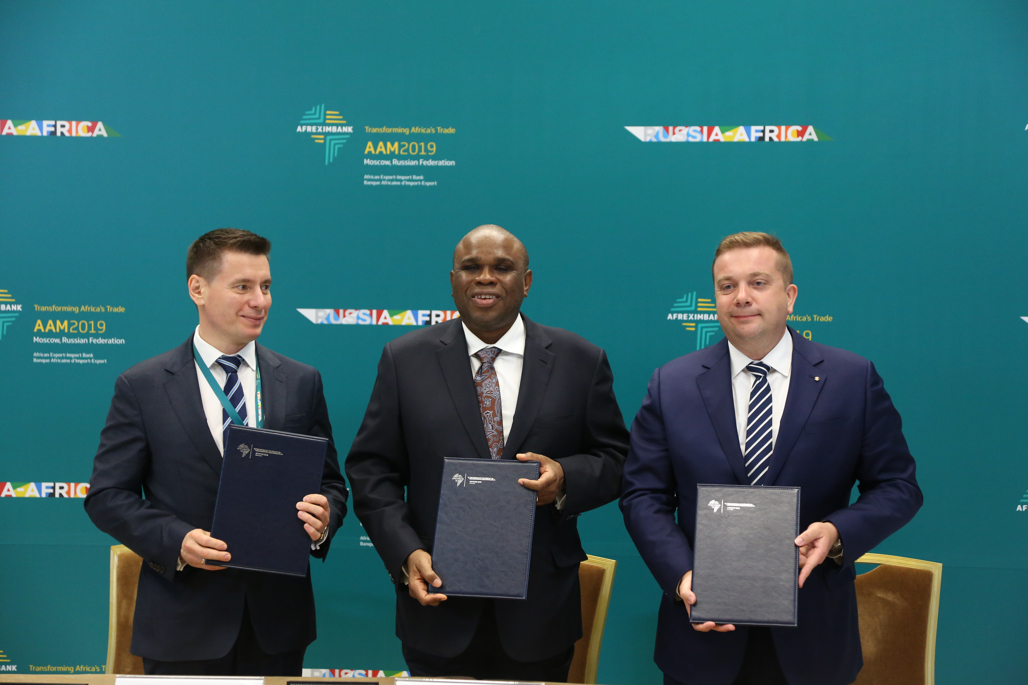 As part of the Russia–Africa Economic Conference in Moscow, the Roscongress Foundation, African Export-Import Bank (Afreximbank), and the Russian Export Center (REC) signed an agreement to cooperate on establishing effective communication between expert communities and business circles in the Russian Federation and African countries.

The document was signed by REC Chief Executive Officer Andrey Slepnev, President and Chairman of the Board of Directors of the African Export-Import Bank Benedict Okey Oramah, and Chairman and CEO of the Roscongress Foundation Alexander Stuglev.

The agreement will serve as the foundation for joint efforts to develop long-term, mutually beneficial cooperation between Russia and Africa. These efforts will include supporting the search and development of partnerships, as well as mutual support in investment and financing, export and import, and tourism and cultural interactions. The parties also plan to participate in the development of world-class joint communication platforms in the interest of stimulating international cooperation across various sectors.

“We are currently working on a number of other projects with Afreximbank and various African regions. That list includes the financing of shipments of Russian-manufactured ground transport, industrial infrastructure construction and modernization projects in Nigeria and Angola, and mining projects in Zimbabwe and Sierra Leone. Interest has also been expressed in attracting Russian partners to the implementation of projects in the oil industry (pipelines, refining) and agriculture.

For our part, together with Roscongress, we are already planning the next event in the Russia–Africa track. In October, Sochi will host the Russia–Africa Summit, which will be co-chaired by Russian President Vladimir Putin and President of the Arab Republic of Egypt and Head of the African Union Abdel Fattah el-Sisi. This is the first event of this level in the history of Russian-African relations, with the heads of all states of the African continent invited, as well as leaders of major subregional associations and organisations,”

“I am certain that, thanks to the efforts of Afreximbank and the REC, the trust built between the participants of the Russia–Africa Economic Conference will serve as the foundation for new projects. Meanwhile, business networks will continue to develop at the Russia–Africa Economic Summit and Forum in Sochi in October,” added Chairman and CEO of the Roscongress Foundation Alexander Stuglev.