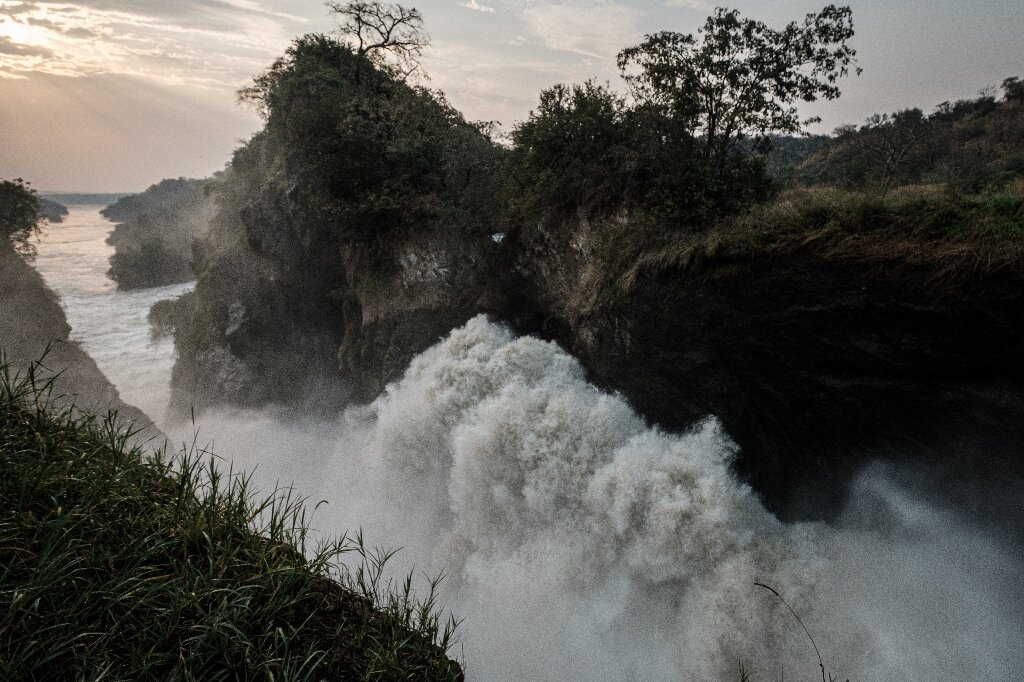 The boat edged as close as possible to the deafening surge of water roaring over Murchison Falls, giving tourists a hair-raising shot of one of Africa’s awesome and terrifying natural spectacles.

Tens of thousands visit northwest Uganda every year to marvel as the force of the Nile crashes into a jungle-clad ravine. But a proposal to build a hydroelectric dam nearby has caused an uproar, and debate over the merits of development at all costs.

“I don’t agree with putting a dam on the Murchison Falls, although I agree with the efforts at looking for development investments in whichever area that might be,” said Ugandan tourist Paolo Kyama after gaping at the 43-metre (141-foot) cascade.

“And reasons for my reservations about Murchison is that it is a very unique tourist attraction.”

The government announced in late November it would allow an international consortium to explore the feasibility of a 360-megawatt hydro plant in Murchison Falls National Park, a protected zone boasting wetlands of international importance.

The decision stunned conservationists, who just three months earlier had been celebrating after the government abandoned the contentious project following a sustained protest by tourism operators, green activists and local communities.

The new proposal looks at damming Uhuru Falls, a smaller cascade nearby, not Murchison Falls as originally envisioned, the government said.

Uhuru Falls is adjacent to Murchison Falls on the Victoria Nile, separated by a narrow rocky strip. It was formed in 1962 when powerful floods cut a second channel just upstream.

“We cannot just say no, or yes, without a feasibility study. So everything must be backed up by science,” said Tourism Minister Godfrey Kiwanda of the policy reversal.

“What made cabinet rescind its position of just not saying no? It was basically that let’s back our no or yes with science,” he told AFP.

The feasibility study will be led by Bonang Power and Energy, a little-known South African company that was enlisted for the first proposal.

The amended plan makes little difference to opponents of the project, who say the two falls are interconnected, and damming either risks the health of the ecosystem and its tourist appeal.

It would be a far cry from the Grand Ethiopian Renaissance Dam, a gigantic project on the Blue Nile that when completed will be capable of producing 6,000 megawatts, and is fiercely resisted by Egypt, which fears its water supply could be at stake.

But waterfalls elsewhere along the Nile have dried up and vanished in recent decades in the wake of major hydropower ventures in Uganda, which sources 80 percent of its electricity from its rivers.

The most recent was Karuma, a once-grand cascade at the entrance to Murchison Falls National Park. A mammoth 840-megawatt plant slated for Ayago, another set of falls further inside the park, could become Uganda’s largest hydro plant.

“We have lost so much. We can’t lose everything… Why don’t we spare this particular one? Are we going to dot the entire Nile with dams?” said Benedict Ntale, vice-president of the Uganda Tour Operators Organisation.

Tourism is Uganda’s biggest earner of foreign exchange, and the industry generates close to 10 percent of GDP.

It served as the backdrop for the 1951 Hollywood adventure classic “The African Queen” starring Humphrey Bogart and Katharine Hepburn, helping put it on the map.

The pristine landscape has been marred by wide roads and construction as other energy and infrastructure projects have encroached on the park. French giant Total has an oil field venture in the park’s western reaches.

Kris Erard, a Belgian tourist and return visitor to Uganda, hoped any prospective hydropower project would bring economic benefits to the region and its people, but was sceptical.

“As long as the locals take advantage of it, I’m all for it,” he told AFP at Murchison Falls National Park.

Just 26 percent of Ugandans are connected to the nation’s electricity grid — a figure the government hopes to triple by 2040.

But critics say there are other ways to generate power that are less controversial or potentially harmful than damming the celebrated waterfalls.

“What we are saying is that there are other sources of energy today. Technologies are changing, everything is improving,” said Ntale. “So why don’t we look at those other alternatives for power generation, so we can preserve the falls.”