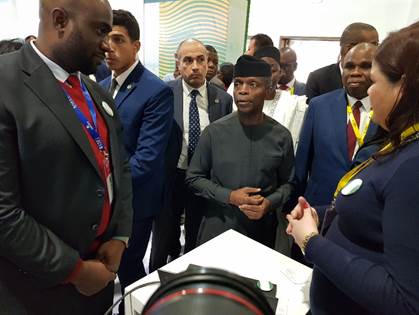 At the stand of the African-Export-Import Bank (Afreximbank), he was briefed about the Virtual Trade Fair, which the Bank is running as part of the trade fair in order to enable those unable to attend the fair in person to be able to participate.

Apart from touring the Nigerian country pavilion, he also visited the stands of Nigerian organisations, like the Nigerian Export-Import Bank and Fidelity Bank as well as the booth of Clothing Africana, one of four SMEs sponsored to the trade fair by the Association of Professional Nigerians in Egypt.

Speaking at the IATF Conference, Prof. Osinbajo said that the IATF was an extra-special event for Nigeria as it gave the country the opportunity to showcase its trade potentials and to reach new markets.

He said that the Nigerian government had instituted a business-friendly climate in the country by updating policies which made it easier to invest and do business.

Also speaking, Prof. Benedict Oramah, President of Afreximbank, said that Nigeria had become the most important source of investment for the rest of Africa and that the diversity of goods on display at the Nigerian pavilion at the IATF showed the tremendous progress the country had made over the last two to three decades.

“We have seen a rapid emergence of major corporates and multinationals in Nigeria that are transmitting positive effects to the rest of the continent,” said Prof Oramah. “The Nigerian entertainment industry today is the third largest behind U.S.’s Hollywood and India’s Bollywood; Nigerian banks have subsidiaries in no less than 20 African countries; Dangote Cement now has investments in several countries. Nigeria’s creative industry is rapidly expanding and making inroads into other African and non-African markets.”

He said that Afreximbank had been a faithful partner to the Government and private sector in Nigeria, noting that, for a very long time, the country had been the largest recipient of Afreximbank`s facilities, with the total commitments during the last two decades exceeding $17 billion.

According to the President, the Bank’s current exposure to Nigeria stands at over $4 billion, with deals worth over $10 billion in the pipeline.

He announced that Afreximbank was pursuing a number of strategic initiatives that would contribute to transforming the structure of the Nigerian economy, including working with the Federal Ministry of Industry, Trade and Investment to develop industrial parks and export processing zones to support the growth of SMEs and major corporates in the textiles and auto industries; developing an internationally accredited testing, inspection and certification centre for food and manufactured goods; and establishing centres of excellence for tertiary health care to make Nigeria the destination of medical tourists from Africa and the rest of the world.

The IATF, which opened on Tuesday, is organized by Afreximbank, in collaboration with the African Union, and hosted by the Government of Egypt. It will last until 17 December and is expected to attract about 70,000 visitors.

Transactions worth about $25 billion are expected to be concluded at the IATF which has almost 1,100 registered exhibitors from 42 countries.