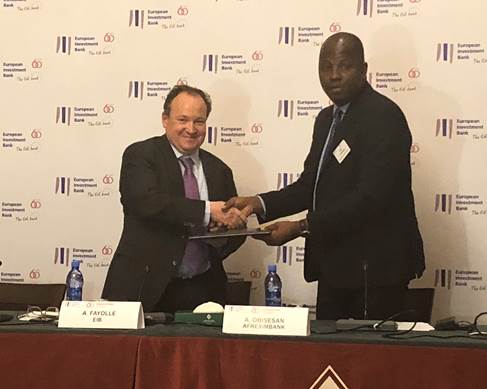 ·         Increasing access to finance for small and medium sized businesses

On the margins of its Africa Day in the Ethiopian capital, Addis Ababa, the European Investment Bank has signed a new fifteen year EUR 200 million loan agreement with the African Export-Import Bank (Afreximbank), aimed at supporting trade-related productive investments, including in renewable energy projects, in Africa. The facility will support promoters in more than 40 countries across Africa with long-term funding.

By improving access to finance for private enterprises, and specifically SMEs and Mid-caps, this loan will enhance Intra-African trade as well as trade with the European Union. It will enable smaller companies to sustain and create new jobs and will ultimately stimulate the expansion, diversification and development of African trade. At least 25% of this financing will be dedicated to projects which will help to diversify the power mix in the region, reducing reliance on fossil fuels and supporting climate goals.

“The EIB, as the EU Bank, is committed to supporting investment in Africa that unlocks economic opportunities, creates jobs and tackles a changing climate. As one of the largest multilateral financial institutions, the EIB has a crucial role to play to help channel private capital towards the energy transition. This is urgent if we want to achieve the Paris Agreement and the Sustainable Development Goals. With this operation Afreximbank and the EIB are joining forces to improve access to clean energy across Africa”.

We are confident that effective implementation of this facility, which heralds Afreximbank’ s financing of climate action projects in Africa, will lead to strong development outcomes, including employment creation, increased economic activities, and increase in tax revenues for fiscally strained governments,” said Prof. Benedict Okey Oramah, President of Afreximbank. According to him, Afreximbank decided to conclude the facility in furtherance of its current strategy which prioritizes Intra-African trade; intra–African investments, industrialization and export manufacturing of the labour intensive type.