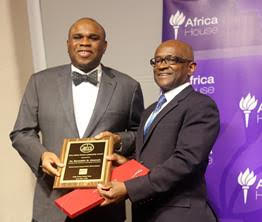 Presenting the award, Prof. Yaw Nyarko, Director of the Africa House, said that Dr. Oramah was chosen because of his outstanding contributions in promoting intra-African trade and industrialisation in Africa and for helping to steer the continent away from traditional economic models where growth had been primarily driven by export of primary commodities and natural resources.

Prof. Nyarko noted that, under President Oramah’s leadership, Afreximbank had witnessed outstanding financial performance, with that the asset base increasing significantly and the balance sheet doubling to reach $12 billion.

In his acceptance, Dr. Oramah said that he was dedicating the award to the staff of the Bank and to its past executives. “As I receive this hugely significant award,” he continued, “I can announce that I am African and proud, because, despite the Afro-pessimism that was at its height during the time the Bank was created, it has contributed in lifting intra-African trade five-fold from $28 billion in 1994 to some $130 billion in 2017.”

He described various initiatives the Bank had launched in pursuit of Africa’s transformation, noting that it was supporting the creation of large light manufacturing capacities across the continent, with about 3,000 hectares of industrial parks and export processing zones under development.

Dr. Oramah added that the Bank was financing the development of logistics infrastructure and testing, inspection and certification centres across Africa in order to increase the exportability and competitiveness of African industrial products.

He announced that the Bank disbursed more than $9 billion, on a revolving basis from 2015 to 2016, in order to assist many African economies cope with the devastating commodity price shocks.

Africa House organises the Leadership Awards to celebrate its achievements, progress, and vision for the future and to honour individuals and organisations that embody its spirit and values.

Afreximbank and the NYU Africa House plan to collaborate in research projects, especially those focused on expanding understanding of the African transnational Diaspora and exploring the opportunities that exist in increasing Diaspora involvement in trade and investment promotion across Africa.

The contents of this e-mail and of any attachments are confidential and privileged and are intended for the attention and use solely of the addressee(s). The contents do not necessarily represent the official view(s) of the African Export-Import Bank (Afreximbank). In the event that you are not named as an addressee, please notify the sender immediately, permanently delete the e-mail and any attachments, and do not disclose, disseminate, store or circulate either in whole or partial the contents of this e-mail or any attachments. Afreximbank will not accept any liability whatsoever for any loss or damage by reason of viruses affecting this e-mail.