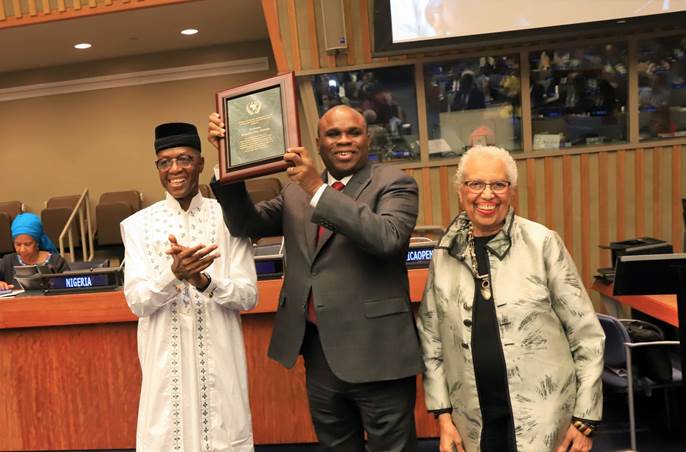 The award, presented by the African Renaissance and Diaspora Network (ARDN) during the “Africa: Open for Business Summit” on the sidelines of the United Nations General Assembly, celebrates leadership for and from the African continent in pursuit of the 2030 UN Agenda for Sustainable Development and the African Union’s Agenda 2063.

In a citation preceding the award, Constance Newman, Chairman of ARDN and a former United States Assistant Secretary of State for African Affairs, said that Prof. Oramah was selected as the 2019 recipient in recognition of his exemplary leadership in the fields of trade, trade finance and economics, and as a scholar and prolific writer.

“As the leader of Afreximbank, you have not only overseen the strengthening of trade activities throughout Africa, you have also played pivotal roles in the application of the Bank’s expertise to support humanitarian emergency relief programmes,” she said.

Ms. Newman also cited his achievement in the “development of the Bank’s Health and Medical Tourism Programme, working with international partners to foster the emergence of world class medical facilities and research centers across Africa designed to improve life expectancy as well as stem the outflow of billions in foreign exchange”.

In this way, Afreximbank dramatically echoes the ideals of the United Nations and its Strategic Development Goals, she concluded.

In an acceptance speech, Prof. Oramah said that he saw the award as a call to action to do more to support Africa’s effort to achieve economic growth, arguing that Africa needed economic independence as political independence was not enough.

He said that the Africa Continental Free Trade Area (AfCFTA) was an attempt to enable Africa to achieve economic independence, announcing that Afreximbank planned to disburse about $25 billion toward intra-African trade during its current strategic plan period.

Afreximbank had also set aside $1 billion as an adjustment facility to assist countries that might be impacted negatively by the takeoff of the AfCFTA to enable them adjust in an orderly manner, added the President.

Earlier, Tijjani Muhammad-Bande, President of the 74th United Nations General Assembly, said that Africa was central to the world and was always open for business. He invited people from around the world to come and trade with the continent.

ARDN is an international non-governmental organisation affiliated with the United Nations with the mission to accelerate the attainment of African renaissance by advocating for and supporting United Nations objectives and by mobilizing the passion of governments, educators, artists, intellectuals, the private sector, civil society and youth, using the power of art, sport and culture for creating a better world.