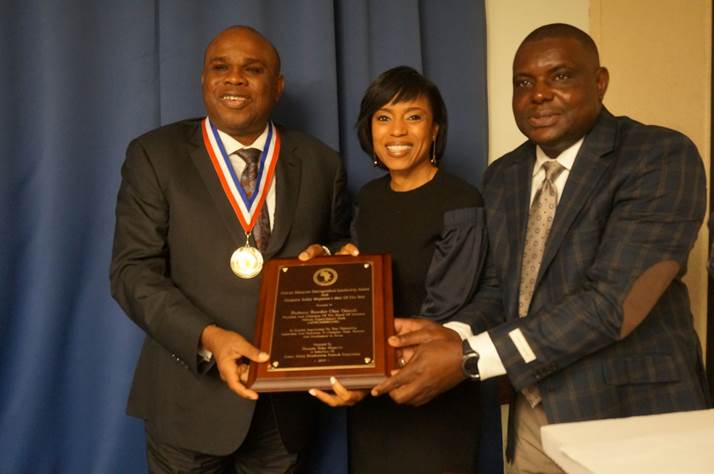 Presenting the two awards, Angela Alsobrooks, Prince Georges County Executive, said that they were in celebration of Prof. Oramah’s achievements and contributions toward the development of the African continent.

She also referenced Prof. Oramah’s “unique, excellent and very impressive leadership style in managing the activities, events and developmental programmes of Afreximbank across Africa and all over the globe”.

In his acceptance speech, Prof. Oramah said that he saw the awards as a call to action given the many tasks that remained to be accomplished to develop Africa.

He commended the contribution of the African Diaspora to the continent’s development, saying that, should the collective African Diaspora be regarded as the 56th African state, it would rank top in terms of “GDP” and would have an estimated GDP of over 500 billion US dollars and GDP per capita significantly higher than Africa’s average.

According to him, with more than 30 million Africans living outside their home countries and remitting about $63 billion and saving another $53 billion annually, the Diaspora has become an intra-African trade resource.

He argued that that the African Diaspora must be brought into intra-African trade in order to deepen the dynamism of that trade. Afreximbank’s intra-African Trade Strategy, launched in May 2016, was part of the effort to address that challenge.

A key component of that strategy was the broadening intra-African trade to Include the Diaspora, he said. In that regard, the Bank was supporting the growth of businesses operated by the African Diaspora by providing working capital finance to to import ethnic foods and other tradable goods from African markets.

Also receiving awards at the ceremony were Baffour Adjei Bawuah, Ghana’s Ambassador to United States, and Zoe Leoudaki, a television producer and reporter at the Voice of America.

The award ceremony was organised by Diaspora Today Magazine, one of the leading publications targeting the African Diaspora in the United States.