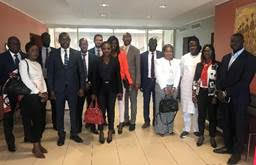 Cairo, 03 Oct. 2018: – African banks can improve their business performance by keying into the Afreximbank Trade Facilitation Programme (AFTRAF), which was recently introduced by the African Export-Import Bank (Afreximbank), representatives of the Senegalese banking sector heard yesterday in Dakar.

Speaking during a roadshow to introduce AFTRAF, Fatma Bao, Manager in the Afreximbank Guarantees and Specialized Finance Unit, said that the programme was structured to enhance confidence of counterparties in the settlement of international trade transactions for critical imports into Africa, support intra-African trade and facilitate the purchase of equipment for production of export goods.

She said that the programme was being offered to African financial institutions in response to the increasing de-risking of African banks as a result of stringent compliance and regulatory requirements imposed by international banks.

The Afreximbank team described the programme as the Bank’s response to the recurring trend of reduction or withdrawal of trade lines to African banks by the international banks following the de-risking process.

“Afreximbank wants to understand the needs of the Senegalese market and the current obstacles facing you to satisfy these needs so that we can cooperate with you to improve the country’s trade,” said Ms Bao.

The roadshow was held as part of a strategy to allow Afreximbank expand its coverage of Africa and to onboard Senegalese banks to the AFTRAF programme. It also aims to enhance cooperation between Afreximbank and the local banks in order to grow the nation’s economy.

Similar roadshows are planned for several other African countries.

In addition to Ms. Bao, the Afreximbank team included Okechukwu Ihejirika, Senior Manager in the Banking Operations Department; Ismail Kamara, of the Trade Finance Department; and Abdalla Rehab of the Client Relations Department.